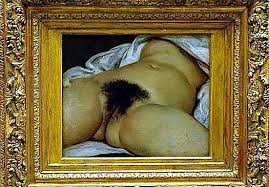 PARIS (AP) -- Facebook lost a crucial legal battle Friday as a Paris court ruled the social network can be sued in France over its decision to remove the account of a French user who posted a photo of a famous 19th-century nude painting....
It means a French court will now be entitled to hear the case of a 57 year-old Parisian teacher and art lover, whose Facebook account was suspended five years ago without prior notice. That was the day he posted a photo of Gustave Courbet's 1866 "The Origin of the World," which depicts female genitalia.

The Bible observes that we are all born between "piss and shit," and somehow piss and shit end up getting a bad rap. It reminds me of the old logic joke, "All tables have four legs. My dog has four legs. Ergo my dog is a table."
Posted by genkaku at 8:31 AM