"on the cusp" of things

Only in retrospect, I guess, can anyone say with suave assurance that a particular time or place was "on the cusp" of becoming something else. No one with two brain cells to rub together says such a thing of the present because the empirical evidence of what the future holds is not yet assured to anyone other than TED-talkers and politicians. "Something else" takes its own sweet time. Yes, this day is no doubt the gateway to some "something else" tomorrow, but what, precisely, is beyond the door jamb will take a bit of patience... or arrogance. 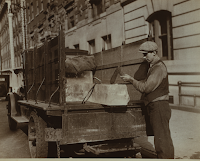 When I was a kid in New York City, not everyone had yet purchased a refrigerator. As a result, the ice truck still made its rounds and sold great chunks to apartment dwellers who still relied on "ice boxes." In the same vein, those apartment dwellers often had small cabinets that hung outside a back window -- cabinets in which to store milk and fresh vegetables and other foods that lasted longer when kept cool.

The ice man came and the rag man came (soliciting whatever cast-offs had accumulated on some closet floor); and the coal man sent swishing rivers of blackness down chutes that replenished supplies in apartment-building basements; and a man who sharpened knives would park his truck and call out

loudly for potential customers; and, later in the day, when children were out of school and parents returned from their work, a man with a portable organ and a monkey would stand in the street playing tinkly music while the monkey jumped around and apartment dwellers threw change into the street.

In summer, the brick oven that was New York would sometimes get relief from tanker trucks passing by and spraying water into the hot, hot streets. This served to wash down the gutters, but it also sent out a glow of coolth that would rise up through the open apartment windows that had not yet invented air conditioning. Not all of the telephones were single-party lines, so there was a politesse that existed: If someone were on the line when you picked up the receiver, you did not listen in on your neighbor's conversation ... except, of course, when you did... and many phones had specific rings that indicated incoming calls ... two long rings and a short, perhaps, to let you know the call was for you.

As often as not, men wore ties, no matter how tattered their clothing. And men wore hats which they tipped to ladies passing ... or perhaps just of their acquaintance. Horse-drawn wagons were not common, but nor were they rare. The mail came twice or maybe three times a day. World War II, already in full swing in Europe, was just gathering momentum in the United States... and I was fortunate to have a blue tricycle made of metal.

All of it and more like it was not "on the cusp" of anything. It was just the way things were.

Now, of course, I can see that my childhood environment was on the cusp of whatever evolved in its wake. I can indulge in a wispy nostalgia or remember the medicines that did not exist or wonder how anyone got along without the Internet.

But I cannot look forward with the same assurance that I look back at the cusp of things. Surely I am once again on the cusp of something. What it is, I haven't a clue and could never possibly have one ... which makes me wonder why anyone outside TED talkers and politicians would even mention such things.
Posted by genkaku at 8:29 AM