the rise of 'art'

When he was alive, my friend Bill McKechnie and I enjoyed various small and large shards of companionship, among them the vow to go and see positively every "spaghetti western" movie made by Sergio Leone... low budget films about the old American west shot in Italy.

These were, for the unanointed, movies with a huge kill ratio, almost zero character development, and a lip synch quality that left a lot to be desired. They were the movies (1960's and '70's) in which the American actor Clint Eastwood made his celluloid bones ... movies like "The Good, the Bad, and the Ugly" and "A Fistful of Dollars" and "For a Few Dollars More."

Bill and I once rushed to Broadway to catch an early showing of one of these movies and before the opening credits had finished, a total of 32 people had been killed. I counted. There were strange bits of historical accuracy in the movies, but by and large they were kind of Italian versions of Japanese monster movies. Bill and I laughed a bit and enjoyed a bit. The intertwining of serious and ludicrous was an interest we shared.

What brought this to mind was a lonnnnng BBC Magazine piece entitled "The Lasting Legacy of The Good, The Bad and The Ugly." Filed in the "culture" folder, the article approaches the movie with the sort of gravitas writers might apply to Shakespeare... its camera work, its music, its enduring je-ne-sais-quoi. I don't begrudge a writer his need to put spaghetti on the table, but there was something strained and concocted and over-the-top about this tempest-in-a-teapot analysis. From where I sat, the movie was just a shoot-'em-up bit of testosterone fantasy. Cut the crap!

Only of course today's chachkies are tomorrow's antiques of great price. Just hold onto something long enough, let the dust gather and ... well, it'll show up on Sotheby's auction block surrounded by praise from effete little men. Shakespeare wrote wonderful soap operas before high school English teachers got hold of him. Now, of course, he is ahhhht ('art' with a little cilantro) and students grind their academic teeth in a vain attempt to enjoy iambic pentameter. 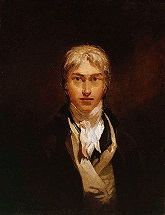 Somehow, this run-in with the deification of Sergio Leone sits cheek by jowl with an encounter a couple of days ago with the 19th century artist JMW Turner. For whatever reasons, I was puddling through Internet reproductions of his work and, in painting after painting, I felt my socks being blown off. A master of light, the effete little men may say. But where love comes calling, poets fall into disarray. I was beyond smitten. I was consumed. I was breathless.

Not that Turner was a chachkie in his time. He was well regarded and required no application of laudatory dust and lust. But as I sat there imbibing and drowning in his work, I felt as transported as perhaps the BBC writer wanted me to feel about Leone. But Turner took me to a place that was beyond the mere "beyond." I was like a man hanging from his period-on-the-sentence noose ... no words possible even if words were possible.

My sensations cannot be shared or forced down anyone's cultured throat. I love, you love, he/she/or it loves. But there is something to be said for the observation that "if you're going to love God, please do it some place else." Artfulness ain't art.