U.S. Supreme Court Justice Antonin Scalia died yesterday at age 79, apparently of natural causes. With one exception, the intellectual twerps along the Republican presidential campaign trail were quick to call on President Obama to allow the next president to appoint a successor. 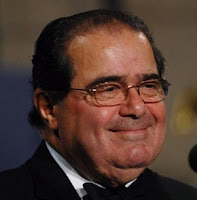 I don't know much about Scalia outside the allegations that he was a somewhat flamboyant conservative. But I do harbor some leftover wishful thinking that the Supreme Court is one of the few credible institutions left in American government. These are guys who, more than most, dig into precedent and try to unravel that which makes legal sense. Legality does not mean that the decisions are somehow "right." It does mean that someone is thinking about the topic in more than a superficial way, and, while flawed, perhaps, the court decisions are still better than what those concerned with their own ox are likely to come up with as regards national policy.

Scalia was a man who was proud to have pushed along the premise that citizens could keep guns in their homes. He favored capital punishment. A father of nine children and unapologetic Catholic, he was against the abortion decision, Roe v. Wade. These, among others, are not views I much like. But because the Supreme Court is charged with making final decisions and because I like to think the justices think about things, I am more or less willing to accede to what I disagree with. And if I disagree, I consider it a more honest fight when challenging the supreme court than, say, challenging Donald Trump or Ted Cruz, whose halo-polishing interferes with serious discussion.

As far as I can figure out, GOP candidate Jeb Bush was the only Republican candidate to say Barack Obama was within his rights to appoint a replacement justice. The other candidates fear that Obama, like other presidents before him, would appoint a liberal to replace this flamboyant conservative.

I feel some strange sense of loss in Scalia's death, not least for his willingness to encourage Christians to show some grit when he mused, "We must pray for the courage to endure the scorn of the sophisticated world." Christians can scare me, but Scalia's validity stands firm in my mind. To enter dangerous, core-issue territory excites my admiration even as it fears the collateral damage.

Ah well ... I'm too uninformed to be a worthy critic or apologist. I guess I just miss the passing of what I assume are men and women of substance.
Posted by genkaku at 11:16 AM