The French, who have always held a somewhat elevated sense of who and what they were in my broadbrush mind, appear to be in the throes of despair about the reconfiguring of some words that employ the circumflex accent. "Laziness!" "Mediocrity!" and other exclamations have greeted the announcement that schools must now accept spellings that both employ (old-fashioned) and no longer employ (new wave) this small chevron: 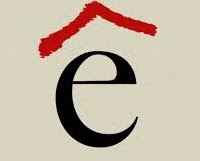 French linguistic purists have voiced online anger at the loss of one of their favourite accents – the pointy little circumflex hat (ˆ) that sits on top of certain vowels.
Changes to around 2,400 French words to simplify them for schoolchildren, such as allowing the word for onion to be spelled ognon as well as the traditional oignon, have brought accusations the country’s Socialist government is dumbing down the language.
Nothing provokes a Gallic row than changes to the language of Molière, but the storm took officials by surprise as the spelling revisions had been suggested by the Académie Française, watchdogs of the French language, and unanimously accepted by its members as long ago as 1990.

Like all cultural kerfuffels, this one is most silly to those who are not directly affected. Does a doughnut taste any different because it is labeled a "donut?" This is the 21st century after all.

And yet I sympathize with the French purists ... or anyone who has been through a school system that shoved one culturally-approved spelling or outlook or another down the throats of the culturally untutored. We learned it; we use it; and now, at last, we no longer have to consider it. Our biases and good judgments were based in part on such force-feeding. And now along comes some improvement society that implies all that down-the-throat-shoving was, well, arbitrary, and not at all assured... which means some bedrock understandings are no longer assured.

It is easy to yawn and observe without much sympathy, "what the hell did you expect." It is quite another to digest the reality.

When I was a news reporter, every now and then the local dictionary company (Merriam Webster) would come out with a new edition and there would have to be an article about what words had been added or subtracted and why. It was always a fun story to write. But when I wrote it, inevitably I would be in touch with the company president in order to get some obligatory quotes. And then the two of us would segue into a whine about the morphing of language. Words, we two linguistic Republicans would complain, should have specific meanings if communication were to be achieved. "Alienation" had a specific, sociological meaning ... it wasn't just some slob word to indicate social malaise or distaste. We'd whimper and growl about the changes that were overtaking our assumptions.

When assumption is shown to be little more than presumption ... well, it's not a happy day. It means I have to think and rethink what I had thought I had already thought through. Aaaarrrrgh! A small, enraged troll would rise from his slumber: "Don't mess with my bias, my home, my understanding!"

Linguistic snobs or linguistic slobs ... what a mess.

I guess it's the price of progress ... whatever that is.
Posted by genkaku at 8:48 AM