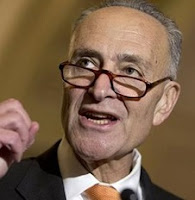 Yes, there are a lot of serious stories out there.

And yet what caught my attention was the tale of Democrat Senator Charles Schumer who has vowed to try to pressure America's airlines and provide enough legroom/assroom on their flights.


The New York Democrat told The Associated Press the airlines have been slowly cutting down legroom and seat width....
Schumer said the average distance between rows of seats has dropped from 35 inches in the 1970s to a current average of about 16.5 inches. He argues that the requirement is needed to stop airlines from shrinking seats and seat pitch, the distance between rows of seats on airplanes, even further.

It's the small and practical stuff -- the lies allowed to go unchallenged -- that can stick in a disaffected craw. "Chocolate" cake that is barely chocolate ... that sort of thing. If no one can get the little and obvious stuff right, what hope is there for the big and complex matters?

It seems unlikely I will ever ride in a plane again, but I applaud Schumer in his quixotic quest. He will in all likelihood be shot down by airline donors (we paid for your political victory, now it's time for you to pay us back), but at least there is some passing nod to those for whom government was once confected ... you know ... the suckers.
Posted by genkaku at 10:33 AM