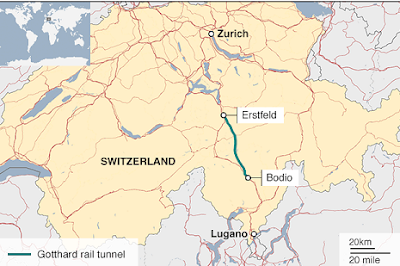 Strange to think that imaginative creation can live so closely -- cheek by jowl in present time -- with cruelty masquerading as kindness.

The world's longest and deepest rail tunnel has officially opened in Switzerland, after almost two decades of construction work.
The 57km (35-mile) twin-bore Gotthard base tunnel will provide a high-speed rail link under the Swiss Alps between northern and southern Europe.
Switzerland says it will revolutionise European freight transport.
Goods currently carried on the route by a million lorries a year will go by train instead.

A Pakistani woman who was set on fire for refusing a marriage proposal has died of her injuries.
Maria Sadaqat, a schoolteacher in her early 20s, was attacked in her home by a group of men on Sunday and died in hospital in Islamabad on Wednesday.
Her family say she had turned down a marriage proposal from the son of the owner of a school she had taught at.
Campaigners say attacks against women who refuse marriage proposals are common in Pakistan...
Punjab province, where the attack on Miss Sadaqat happened, passed a landmark law criminalising all forms of violence against women.
However, more than 30 religious groups, including all the mainstream Islamic political parties, threatened to launch protests if the law was not repealed.
Religious groups have equated women's rights campaigns with promotion of obscenity.

Everywhere there are good people with good intentions who commit both wondrous and unspeakable acts.
Posted by genkaku at 8:42 AM