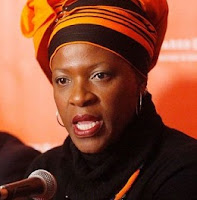 The daughter of Archbishop Desmond Tutu, Mpho, says part of her was "stripped away" when she had to relinquish the Anglican priesthood over her same-sex marriage.....
Reverend Canon Mpho Tutu van Furth followed her father into a life in the Anglican church, but when she decided to marry the woman she loved, she had to leave.

What a wonderful thing: Four kids between them from previous marriages; one an atheist, the other religious; one pink, one brown; one lives in Amsterdam, the other in Cape Town ... if a high school student made the details of this story up, s/he could pretty much expect to get an F for non-credible story-telling.

Sometimes it's hard not to want to take formatted religion by the scruff of its starchy neck and shake it rudely: "Get a fucking life, will you?!"
Posted by genkaku at 4:49 PM