Excellence implies a willingness to fail. 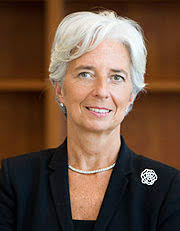 This wispy trail of thinking seemed to springboard from a TV news segment last night that featured Christine Lagarde, managing director of the International Monetary Fund. The IMF issued a report whose parameters I am not equipped to assess, but if Christine Lagarde is on TV, I'll admit my bias towards watching: Bar none, Christine Lagarde is the best-dressed policy wonk on the world stage; she speaks intelligently without referring to what I sense is a tough-as-hard-tack core; and ... well, I enjoy her company even if I suspect it. I'm biased: She's a hottie ... and she reminds me of the old advice, "don't bring a knife to a gun fight."

And here she was last night talking about the IMF report that said among other things:


Despite the ongoing expansion, the U.S. faces a confluence of forces that will weigh on the prospects for continued gains in economic well being. A rising share of the U.S. labor force is shifting into retirement, basic infrastructure is crumbling, productivity gains are scanty, and labor markets and businesses appear less adept at reallocating human and physical capital. These growing headwinds are overlaid by pernicious secular trends in income: labor’s share of income is around 5 percent lower today than it was 15 years ago, the middle class has shrunk to its smallest size in the last 30 years, the income and wealth distribution are increasingly polarized, and poverty has risen.

And somewhere in her responses on public television news, she used the "M" word when referring to the United States I live in. "M" for "mediocrity."

Excellence is the best anything could be. Mediocrity is the most anyone could get out of something... a something too often defined by someone else. Lagarde did not make a federal case out of it. No Bernie-Sanders or Donald Trump harangue. But in measured and mellifluous tones, she laid the possibility on the U.S. doorstep: Mediocrity would drag down a quite resilient U.S. economy, so it was worth the expense to raise the quality bar.

With local graduations in the near-past around here, and with the tsunami of cookie-cutter news stories detailing the encouragements of one speaker after another, I wonder how many will "follow your dreams." How many have dreams that go beyond success and please absolutely no one (perhaps) but the dreamer? An excellent chicken soup. A fine ice cream. A well-clipped hedge. A marriage made not in heaven but in the present. A single, agile step around some dog shit. A breath ... just one ... excellent!

No one says, "follow your mediocrity," but so much of life can seem dedicated to precisely that proposition. What one excellent dream is on the radar so compellingly that failure is no where in sight? Isn't that important when it comes to ineffable riches? Just one small thing or perhaps a big one ... but excellent for all that.

Yes, the price is extravagant. People may call you arrogant or insane. But just once, just one thing, just one excellent thing ... what the hell, you can always fall back on mediocrity and no one (except you) will be the wiser. Is that the sort of personal economy anyone really wants to claim as home?
Posted by genkaku at 8:15 AM