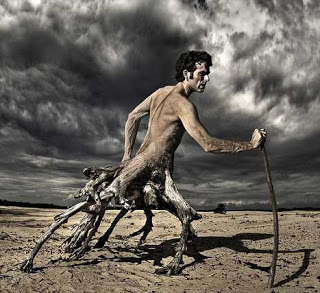 Two or three hundred years after the Buddha died, a group of monks got together and swept up the orally transmitted memory of his words and "Buddhism" was off to the races. It was sort of like Christianity, I guess -- a gaping hole between the sayer and what was actually said. Jesus or Buddha may have said what was later alleged, but the time lapse called the accuracy into question for all save the most devoutly idiotic.

Idiocy is not a deal-breaker in spiritual life. Everyone molds and shapes and lies. The question that really matters is, does the confection pan out in reality, in practice, in action. If it does, fine. If it doesn't, fine. No need to slather on the holy writ or 'incontrovertible truth' ... the point is, does it work?

So, two or three hundred years after the source of the alleged data died, a format appeared. Some committed themselves to finding out if that format was/were true. Others just lolled in their beliefs.

One of the go-to books in Buddhism (very popular) is "The Dhammapada," a collection of the alleged teachings of Gautama. And in the P. Lal translation are the approximate words, "If you find no equal/ Or better in life/ Go alone:/ Loneliness is preferable to the company of fools."

With two brain cells to rub together, the first question into anyone's mind when reading such words is, "What fool would be foolish enough to judge another a 'fool?'" The question encourages what sometimes is camouflaged as "compassion:" Go easy on your brethren on the path; everyone goes over bumps and makes mistakes in this life; to see one is to be one. It sounds good, but I have never learned to be very good at it. If someone is a nitwit, I am willing to be branded a nitwit as a means of earning the right to call someone else a nitwit. It's a failing, I suppose, but it's a little late now for this leopard to change his spots.

I guess what brought this to mind was the presidential race here in the United States. Everyone wants to be well thought of even when they clearly lack the substance on which a good opinion might be based. What evidence is there that one candidate or another is working on behalf of the electorate whose vote s/he seeks? How much of what is being said is said simply as a statement the candidate hopes the electorate will not check? How much of it is self-serving twaddle?

In an age of yuppie conformists, it is hard to find a (wo)man with sand, with substance. Rarely do these feather merchants get called out. Why? Because it takes too much energy for too little payback. And yet once in a while, in one venue or another, the conformist and his foundation is called out. Take, for example, this snippet from the 2007 movie, "Charlie Wilson's War."

It gets so tiring to deal with people who think they've got it right because others agree with them. No need for experience or perspiration -- the rules are the rules and "we" abide by them while others surrender themselves to the twisting confusion of actually finding out.

I would like to think I was a more kindly soul, but the fact is that after all these 'Buddhist' years, I am not. I can only swallow so much of correct and approved beliefs before I resort to a sometimes enraged loneliness. Those who can't don't bother me. Those who won't and yet insist on being highly regarded in a world of conforming tapioca turn me into a candidate for a charge of Murder One.

Loneliness is no joke. I get it. But my patience only extends so far. And then ... and then ... "will you please stop fucking around?!!!!"

He said, foolishly but without regret.
Posted by genkaku at 7:47 AM