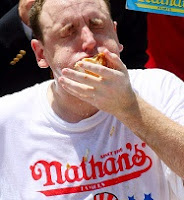 Heavyweight boxing champ Muhammad Ali was feted and buried last Friday, in the same week when former secretary of state Hilliary Clinton became the first woman to be a presidential candidate for a major American political party. And around here, Senator Elizabeth Warren, a darling of left-leaners like me, is going to hold a meeting today around the corner and up the street.

Somehow there is little or no time to sip and savor the events of the time. Everything is like a hot-dog eating contest on Coney Island -- just shove another one in and swallow it in a mad dash for some gold medal that will mark a vast collection of untasted happenings. To slow down and savor is to risk being overrun by the hoard that likewise collects endless input.

The price of everything and the value of nothing.

The first thought into my head about Warren's visit: There will be a traffic jam on Conz Street where the veterans hall venue is located. Remember that if you run any errands. And after that, the thought that Warren's visit will praise Hillary in an already liberal environment and (now the important part) try to convince die-hard Bernie Sanders followers to release their death grip on Sanders' liberal agenda and vote for Hillary ... no sense in giving sociopath Republican Donald Trump any leeway. Hillary will win the presidency and if she doesn't know enough to thank Donald Trump, she'll be a bigger fool than I think she is. What she may do for the down-ticket candidates -- those seeking to dethrone state and federal Republican incumbents -- remains to be seen.