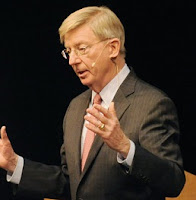 In the midst of the swirling no-substance chaff infusing the U.S. presidential race, conservative Washington Post columnist George Will, said last Friday that he had disaffiliated himself from the Republican party. Will credited both Republican presidential candidate Donald Trump and House Speaker Paul Ryan with helping him to make his decision.

There was a time in the past when I would read Will's columns as a means of knowing, roughtly, what the enemy was thinking. He was intelligent -- sometimes overbearingly so -- and maintained the old values of researching what he was talking about. Of late, I have found him too murky-without-purpose, but that's my problem. Will can think, which is more than can be said for a lot of Republicans who currently have a choke-hold on the country. Will seems to honestly feel the country is worth maintaining and advancing ... but a lot of caterwauling is not necessary, and second-hand opinions are not policy material or should be counted among serious thoughts.. Will is sober in ways that can give sobriety a bad name.

Will is not some air-head Republican who will roll over and spread his legs for assertions based on nothing more than a passing belief. He's a guy worth listening to, however lazy I have become about listening to him.
Posted by genkaku at 9:00 AM