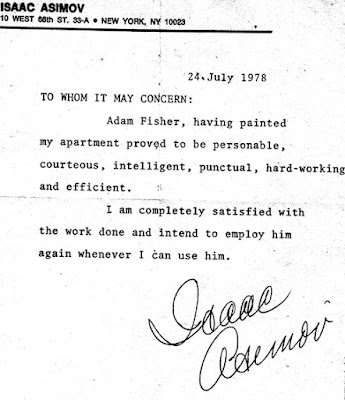 Below, more or less, is the monthly column I submitted to the local paper this month. It's flimsy and weak from where I sit, but it was only a couple of days ago that I realized I had failed to meet my third-Wednesday-of-every-month deadline and rushed to correct the error... neglecting in the process the old rule, if you're not sure of what you're saying, don't say it. Oh well, mediocrity is like old age ... stuck with the farm. Which doesn't mean I have to like it. I am interested in "trust," I had a few snippets kicking around and I used them.
***************************************************
Once, as an apartment-painter in New York City, I asked the prolific writer and scientific whiz kid Isaac Asimov for a letter of recommendation. I said that some of my would-be customers asked for such recommendations and I figured Isaac's fame could help me land a job and put spaghetti on my table.

Both of us were chuckling as we went into his office where he batted out the recommendation. What a ridiculous exercise. It was like asking a politician to suggest who might be best suited for the office s/he wanted: Would the applicant provide anything less than the most sparkling endorsement?

But I needed to eat and pay rent and if letters of recommendation were the way to play the game, I would play. Still, petitioning Isaac made me wonder about those who seem willing to trust the endorsement of others more than -- or even as much as -- they trust their own. Trust is an odd thing to hand over to someone else.

I felt comfortable asking Isaac for kudos, manufactured or otherwise. I had painted for him and his wife, the former psychiatrist Janet Jeppson, on several occasions. During lunch breaks filled with comfortable, laughter-stitched banter, I usually had some question I wanted to ask Isaac (what is zero? or what is the greatest-unknown in science? for example). The conversation almost invariably ended with his saying, "I wrote a book about that. Wait a sec -- I'll get you a copy." And he would.

Trust, however vague, is the realm in which anyone might hope to relax, to feel assured, and to feel safe. Strange to notice that distrust entails the same characteristics. Donald Trump, for example, instills trust in those who rest assured in distrust

And trust, like the conversations with Isaac, can inspire wry laughter. Sometimes it's downright ridiculous. Consider the "life insurance" whose existence lacks all meaning until a dead body shows up. Wouldn't "death insurance" be more appropriate? Or consider the two-by-four which has not measured two-inches-by-four-inches for years. Or consider the "Defense Department" which changed its name from the "War Department" although making war remains its central concern despite the "defense" it may lay claim to.

And there were serious aspects to trust as an ingredient in the apartment-painting business. Over 13 years as an apartment painter, I learned that potential customers were invariably reduced to their own best guess: Did they trust me? I tried to be trust-worthy: I never missed an appointment or if I did, I called to explain why. I didn't kick the cat or steal the flatware. I showed up on time. I must have done a pretty good job because one woman flew me to California to paint her house out there and I received several calls from former customers in New York after I had moved to Northampton: "It's just the living room," they might say.

But trust was a two-way street. Not only did my customers need to trust me. I needed to trust them. Over those 13 years, I learned that I really didn't want to work for people I disliked. Money was important, but so was an amiable environment. I learned, roughly, to steer clear of rich people: People who were rich didn't get that way by being nice. Further, doctors, lawyers, priests and cops were dubious prospects because each of those professions entailed a dynamic in which the customer needed someone to be his or her god. And if enough people ask you to be god on the basis of what you know and what they don't, there is a tendency to start believing you are god ... which is never a good sign.

I never did put Isaac's letter of recommendation to use. But I kept it as a reminder of a good chuckle and a sense that however compelling the longing for trust may be, still, it's a best-guess world in which the answer, right or wrong, lies no further away than your own gut.

And when it comes to being trust-worthy myself, I'll stick with the small and smiling prayer, "May I  become the person my dog thinks I am."