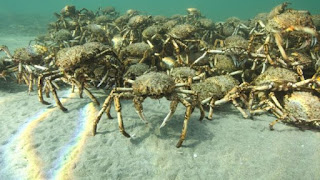 -- In Austrailia, gazillions of spider crabs have convened off Melbourne.

The Middle East has been the worst hit by significant rise in sand and dust storms, with major impacts on human health, United Nations scientists say.
Iran and Kuwait are the most affected countries, largely because of sand and dust blowing in from Syria and Iraq.
Mismanagement of land and water amid conflicts in the region has been a key factor, as well as climate change.

The medical aid charity Medecins Sans Frontieres (MSF) says it will no longer take funds from the European Union in protest at its migration policy.
MSF singled out the EU's deal with Turkey under which Turkey agreed to take back any migrants who crossed the sea to Greece in smugglers' boats....
"MSF announces today that we will no longer take funds from the EU and its Member States in protest at their shameful deterrence policies and their intensification of efforts to push people back from European shores," the group said in a statement.

US rock star Meat Loaf has collapsed on stage during a concert in Canada.
Video footage from Thursday's concert in Edmonton shows the singer, whose real name is Marvin Lee Aday, falling on stage during his performance....
He was performing another hit, I'd Do Anything for Love (But I Won't Do That), when he dropped his microphone and fell to the floor, video footage showed.

This last just drew me back to the fact that although I don't much like Meat Loaf music, I am utterly erased in the long, long, long "I Would Do Anything for Love." It is as a symphony for me, as much as friends may scoff at my questionable taste. To write and perform such a piece and then keel over dead strikes me as a full and worthwhile life.  Music to play the Big Bang Theory by.