courage born of the AK-47 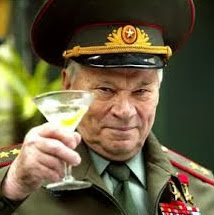 Mikhail Kalashnikov, the inventor of the much-used and excellent Kalashnikov assault rifle, died last month at the age of 94. But before he died, he wrote an anguished letter to the patriarch of the Russian Orthodox Church in 2012, saying his spiritual pain was "unbearable."


"I keep having the same unsolved question: if my rifle claimed people's lives, then can it be that I... a Christian and an Orthodox believer, was to blame for their deaths?" he asked.
"The longer I live," he continued, "the more this question drills itself into my brain and the more I wonder why the Lord allowed man to have the devilish desires of envy, greed and aggression".

How many men or women have the courage to address their own responsibilities so boldly?

What a lovely bequest Kalashnikov left for the rest of us.
Posted by genkaku at 9:57 AM