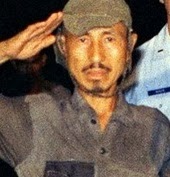 On a day when a Pennsylvania couple is suffering the fallout from trying to sell their "slightly haunted" house and South Korean conscientious objectors, like CO's elsewhere, are jailed for stating what you might think the military would thank them for announcing (who wants an unwilling soldier on the front lines?) and a Japanese man who spent 29 years in the jungle because he did not believe World War II had ended has died at 91 and U.S. President Barack Obama is scheduled to announce revisions (and if you believe that one, I have a lovely bridge in Brooklyn to sell you) in the National Security Agency's invasive-but-dreadfully-'important' snooping capabilities ... and lots of other bits of news are floating around like bubbles in a shaken bottle of Pepsi ... well, in the face of all that and relatively speaking, "I've got nothing."

Nothing that seems to be something.

In the backyard, a couple of shingles fell off the zendo roof and I have called on roofer to get an estimate for how much it might cost to reshingle. It's not a big job and at another time I would have done it myself. I resent the fact that the "30-year-shingle" I bought and applied in 1998 has begun to crumble in about half the guaranteed time. I cringe at what I suppose will be the indignity of not being able to afford the work.

And, as if to add fuel to the flames, the "donate" organization I am linked to on this blog (WePay) sent me some sort of notification that I will have to revise my connection to them... hook up with some other donation organization in order to maintain my status. I dislike the bureaucracy, but more, I dislike being reminded that asking for donations is pretty uppity in the first place: What tangible service or goods do I offer that warrants such requests? I write and the zendo is open to the public ... but otherwise? There is food on my table and there are so many others who have more compelling cases. It's one of those aaaaarrrrrgh situations. Assuming the roofer does come with an estimate, I can imagine its costing about as much to reshingle what amounts to a large shed (16x12) as it cost me to build the whole structure in the first place ... $2,000 ... and it could hardly take more than a day to do the work. Groan and grumble under grey skies.

The best I can come up with this morning is to be thankful that the early fog is not possessed of sound. Talk about a noisy environment!

Talk about Totally Useless Information!
Posted by genkaku at 8:45 AM