If I were a freshman in college or a Ph.D. candidate, I imagine I could write something cogent and remarkable about "The Wall," a 2012 Austrian movie I watched last night at the suggestion of a friend. I might even get a good grade as I yanked in comparisons and contrasts that touched on the human condition. But I am no college kid and waxing skilful and controlled about "The Wall" feels somehow ridiculous -- like some child who is proud to present a doting mom with a tablespoon full of air that s/he has brought in from the outdoors. (Here's another review.)

A linear description of the movie (see the links above for an example) goes like this: A woman travels with a couple to an alpine house where the three are about to rest or relax or vacation or something. After their arrival, the couple decides to walk into town which lies at some unspecified distance from the house. They leave. When they do not return, the woman, whose past is not specified, decides to look for them. And it is then that she runs into an invisible wall. In whatever direction she goes, she cannot get beyond it. She tries ramming it with a car. It doesn't work. Her alpine environment is spacious and beautifully photographed but ... the wall is the wall and she is not going to escape.

At a linear level, the movie strains credulity but does not shatter it: Who knows, maybe there is some explanation of the wall that will be revealed as the movie goes on. But there is no explanation. Why the wall exists or how it came to be slips into an irrelevant backdrop: That the wall exists is enough. The unnamed woman lives out several seasons, keeping a diary as she goes, 'behind' the wall. Her perceptions while in the company of a dog, two cats, a cow, a young bull and a white crow ... change.

A (wo)man alone in nature. Many of the 'great' human themes are touched -- birth, death, fear, love, time, sadness, smiles, self ... touched, but just about the time this viewer thought he was about to get a philosophical or emotional handle on the situation, the movie would cut off any such childish escape route. For example, just at the moment when I thought perhaps the tale would turn into some treacly transcendental man-in-nature format, the tale moved on as if shaking its head and saying, "no, that's not it." Or, just about the time I thought that perhaps I was watching a filmed version of some existential arrogance like Camus' "The Stranger," the movie would take my hand like some mother assuring that her inattentive child would not walk into traffic. The warning was firm and warm and refused to allow me any safe, intellectual or emotional bolt holes.

The movie lacked any special affect and yet was somehow affecting. More than once, I caught myself 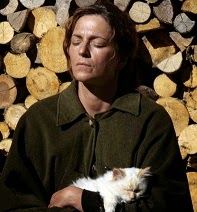 wondering if this woman were going crazy or was she displaying some deeper sanity? But where there are no comparisons available, what difference did it make? Sane and insane became differentiations that were possible, but were they really worth the energy or even especially accurate?

The movie was evocative, but what it evoked was like placing a finger on a drop of mercury on a table top ... try touching it and the mercury simply moves somewhere else.

I can't think of a single person to whom I would recommend this movie. It wasn't solemn in ways that would delight a college freshman or a Ph.D. candidate, but neither was it serious. It was before "serious" or after "serious" somehow. It seemed to remind me of something I was happy to be reminded of but what that something was lay just out of reach. It was boring and I was strangely interested. It was quietly important in ways that declined to be called important. It challenged all sissy notions of "paradox" and seemed to say, "Of course paradoxes make sense ... pass the muffins, please."

As movies go, "The Wall" was odd. It made some strange sense and yet was off-the-wall.

I liked it, I think. But I'm not entirely sure that that's true.

It's just my spoonful of air.
Posted by genkaku at 8:06 AM