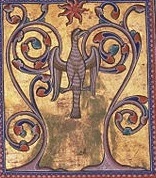 Two or three inches of snow have turned up the volume of dawn silence today.

The silence will be abetted, a bit later, by the absence of two pretty regular zendo visitors. Bram has a funeral to attend outside New York and Nick is somewhere in the throes of a wedding for one of his friends ... in Mexico.

Yesterday, on a Buddhist Internet site, I was reading about personal appreciations of "a retreat" -- a few days or a week or longer of intensive spiritual practice ... far from the madding crowd. On the one hand, how kind and sensible anyone might be to take advantage of such an opportunity. On the other hand, retreat from what? retreat to what? There are tons of sincere and provocative answers, but at some point, seriously ... retreat from what? retreat to what?

But is "retreat" exactly the right word? People retreat from something or perhaps they retreat to something. There is a sense of achievement nestled within the word "retreat." It's OK as far as it goes, but I suspect it really does not go far enough... although the only way to know that is, as far as I can see, to attempt a retreat.

But once the sturm und drang has settled a bit ... seriously ... retreat from what? retreat to what? Retreat from a funeral? Retreat to a wedding? Retreat to the zendo on this muted, muted morning? I'm not trying to diss anything here: I just think the question deserves asking.

Yesterday, I was emailing with a friend about the resurgence of some bad-apple spiritual adviser -- a manipulator who had been caught out in his sexual and financial malfeasances, had been brought down and thrown out, and now was making a comeback. And it crossed my mind, not by way of surrender, but simply as observation, that "Good, bad or indifferent, the phoenix always seems to rise from the ashes." Is there something untrue about that? If so, I can't find it.