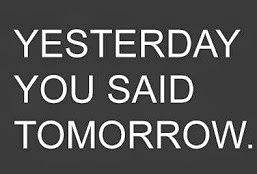 Yesterday, after zazen, I got a very nice note from Nick, a fellow who has become something of a regular for Sunday morning seated meditation. Nick had sent me an email on Friday saying he would come yesterday. Then he didn't show up.

Nick's email was somewhat hang-dog: He was sorry that he "bailed," but the fact of the matter was that he was in bed with a beautiful woman and he "chose" not to come.

The note made me happy for him and happy for his practice. He, on the other hand, felt somewhat guilty because he had heard my past admonitions about Zen practice: "Make a promise, keep a promise." If you say you're going to do something -- even to yourself -- then you really should bust your chops to do it.

But the corollary is this: If, for some reason you can't keep your promise, then don't make up excuses. Don't say, "The pipes burst, so I couldn't." Say rather, "The pipes burst and I chose to cope with them." Spiritual practice has to do with facts.

I was happy for Nick and happy for his Zen practice....

Not least because it was pretty damned cold in the zendo yesterday.
Posted by genkaku at 12:20 PM