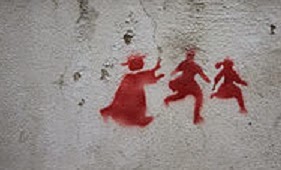 Boring alert! Just rattling around in my somewhat addled brain.

In the past, I have taken part in sometimes heated debates. Specifically, I am thinking of the sexual and fiduciary malfeasances in the world of Zen Buddhism and the pedophile scandals that rocked the Roman Catholic Church. It is not my interest this morning to revive the heart-felt particulars of those debates but rather to poke around a little in the argumentation itself. I will use the Catholic Church as an example not because I am anti-Catholic, but rather because it is easier to speak of one instance than it is to speak of many. What I wonder in the midst of it all is the extent to which the aspects of that instance offer some generalization. I really don't know.

Starting most recently in 2002, pedophilia within the Catholic Church gained some traction when The Boston Globe ran a series of articles. Child abuse within the church had been a hot topic for centuries, but the newspaper articles cast a public light on what had been kept imperiously private in the past. The power of the institution to adjudicate its own missteps was hardly questioned, even by those charged with public justice. The Globe articles opened the door to a questioning that lingers to this day: Two days ago, for example, a Guardian article noted that two Catholic orders had admitted -- during "the largest inquiry into institutional child abuse in UK legal history." -- that they had abused children in their care. And then there's today's story of the U.N. grilling the Vatican.

Church malfeasance may not be front-page news any longer, but the willingness to question and sometimes punish has entered where once the church had been above and beyond reproach because, to all intents and purposes, the church said so and had the ear of those in social power.

The visceral heinousness of child abuse can hardly be overstated and when an institution imbued with some vaguely-described good proves to be the perpetrator ... well it was a heady mix, and the critics went to work with a will, citing instance after heart-rending and infuriating instance of cover-up and lies and vile action. The laundry list seemed never to end.

But that laundry list -- endless as it might be -- did not dissuade those who were on board with the Catholic Church. Counter-arguments rose up with the fury of a gored ox: These were Catholic-haters who sought to bring down the church, for example. Or, for the more thoughtful of the faithful, yes, there may have been mistakes in the past, but let's not throw the baby out with the bath water; just because there were some rotten apples in the barrel did not mean the other apples were not sweet. We should not destroy the Holy Mother Church or its benevolence just because specific mistakes had been made.

And this is the point at which I find myself curious -- about the Catholic Church, yes, but also about other spiritual persuasions that find themselves in a negative spotlight:

Critics stand on comfortable soil in the sense that they can cite chapter and concrete verse of perfectly-obvious malfeasance. Defenders, on the other hand, may be able to adduce a laundry list of good deeds, of various kinds of benevolence within the human realm, but does this laundry list of decent and kindly action fully define the "baby" they hope will not be thrown out with the dirty bath water? I have a hunch it does not.

My sense is that the critics are on terra firma: All they have to do is cite chapter and factual verse. But defenders are backed into a corner of their own devising: Yes, the "baby" can be seen in good works, perhaps, but the notion that good works are the only thing under threat from critics is not entirely complete or honest.

The defenders often assert, by implication of their defense, that spiritual life is more than just a laundry list of good works. But they are unwilling or incapable of saying precisely what constitutes that "more." This is a question I have repeatedly put to critics of various aspects of Zen Buddhism. Those critics are often unwilling to throw the baby out with the bathwater, but what constitutes that baby leaves them evasive and silent. And the moment they admit there is some "more" inherent in spiritual endeavor, they are trapped making another laundry list, another limitation to the ineffable something-or-other which they feel is worth upholding. Defenders and critics alike are hoist by their own petard.

I have agreed roundly with many of the criticisms of the past, but I do think it behooves a critic to examine the ground from which s/he springs. I am not here taking part in the defender's mealy-mouthed unwillingness to meet criticism head-on ... stuff like, "look to the mote in your own eye," cowardice passing as "noble silence" and the like. What I am interested in is the willingness to admit that even if someone cannot adequately depict the "baby" or the "more," still there is a value to fessing up.

And the best I can figure, that confession boils down to, "I love it" or "I choose it." My experience is such that I am willing to put in a good word, for example, for the practice of Zen Buddhism. No doubt there are Catholics who are willing to do the same. But to claim to be "defending the Dharma" or "protecting God" is really pretty arrogant ... not to mention unduly vague.

"More" is just my choice.

A little humility never hurt.
Posted by genkaku at 8:59 AM