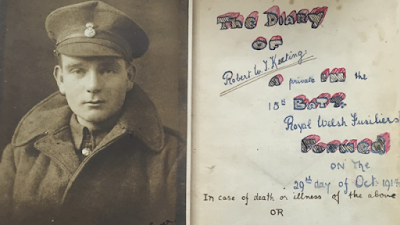 And now, besides World War I's Christmas Truce of 1914, a diary surfaces to confirm that there was yet another such truce in 1915 despite the fulminations and wrath and orders of officers and other leadership that was aghast at the notion that ordinary soldiers could simply lay down their arms in the middle of a bloody confrontation.


... a senior officer "came round the trenches and told every fellow to shoot any German he saw" but "no one took any notice".

Imagine how pissed off and/or confused those in command -- politically and militarily -- must have been.

Imagine how courageous without any thought of courage the soldiers must have been.

In the midst of a wild and horrifying slaughter house, somehow the word "no" gained traction. Not just talk-the-talk traction, but walk-the-walk.

I am not a great history buff, nor do I subscribe to the idea that history teaches lessons descendants are actually willing to learn ... but this hundred-year-old confluence and decisiveness gets under my skin every time and makes me want to cry.

It is beyond "go fuck yourself!"

It is just plain human.

As human as today's political and military yearnings to do it all again.

An irascible firebrand leaps up in my mind. He is defeated before he even opens his mouth. Nonetheless he does and screams, "Fuck 'peace!' Just don't do it!"
Posted by genkaku at 7:19 AM