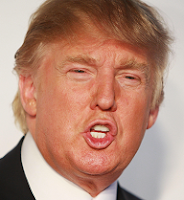 If nothing else, Donald Trump, the current political front-runner in the Republican race to be 2016's presidential nominee, must stand out as a shining star in the eyes of those who credit themselves with an aristocratic heritage and culture.

The English, the French, the Japanese, the Chinese, the well-appointed hordes everywhere -- the ones whose ancestors' portraits hang on the walls and act as a reminder of a refined and cultured existence stretching back hundreds, if not thousands, of years ... how could they not bask in this billionaire's brash assertiveness and idiocies? With a pitch-perfect politesse, which among this band would not look on Trump as the very model of an America they had always quietly disdained, even as they were willing to take its money?

Nekulturny -- that's Trump ... the very essence of an America which knows the price of everything and the value of nothing; the contrasting backdrop against which the aristocrat, real or imagined, might measure his own stature and composure. A guy like Trump bolsters and supports ancient and well-heeled understandings of what it is to be kulturny -- understandings that quietly overlook the role that the unwashed played in the clean hands of poetry and politesse.

No need to fret. A bias is assured. Donald Trump helps to make it possible:


America is a nation of merchants.