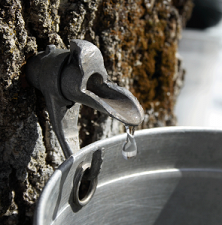 Organization produces stability, but it cramps individuality. Individuals want the blessing of stability AND the freedom of individuality: Sacrifice to a wider good becomes onerous and confining... and the resulting revolution brings instability back into focus.

The American political landscape comes to mind, as does the De Beers diamond cartel and...

The maple syrup wars in Canada:

Redheaded grandmother Angele Grenier doesn't look much like a criminal, but she is one of Canada's most wanted women.
And as such, she faces the likelihood of lengthy jail time, and fines of about 500,000 Canadian dollars ($368,000; £245,000).
Her crime? She's a self-confessed smuggler and illegal dealer, someone who sells contraband across province lines.
But what exactly is she selling that has so incensed the Canadian authorities, and seen the police search her property? Drugs? Guns?
Nope, maple syrup - the lovely, sweet stuff that you pour on your breakfast pancakes, or add to your biscuit recipes.