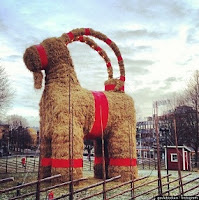 STOCKHOLM (AP) -- In what's become a Christmas tradition to some Swedes, a giant decorative goat made of straw was set ablaze early Sunday and police arrested a 25-year-old man suspected of arson.
The straw goat is a beloved Christmas symbol in the city of Gavle, in central Sweden. However, it's also become a tradition of sorts to burn it down.
This year's edition lasted nearly a month on a downtown square before going up in flames.
Police said they arrested a suspect wearing a balaclava and clothes reeking of lighter fluid. His face was covered in soot and his hair damaged by fire.
Police said he would be questioned once he sobered up.
The goat is an ancient Scandinavian Yuletide tradition that preceded Santa Claus as the bringer of gifts. 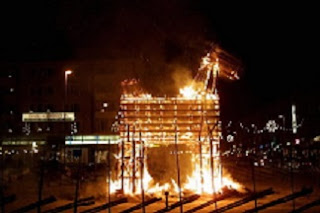