taking on the shit 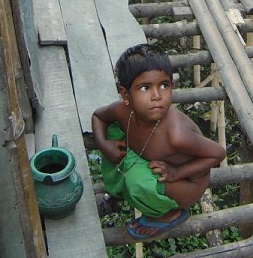 NEW DELHI (AP) -- The World Bank has approved a $1.5 billion loan for a sanitation program in India, where millions of people have no access to toilets.
The bank said in a statement Wednesday that the loan will be used to support government efforts to provide toilets in villages and end the practice of open defecation by 2019.
More than 500 million Indians, especially in rural areas, continue to defecate in the open, despite efforts to encourage people to change their habits.
World Bank representative Onno Ruhl said one in every 10 deaths in India is linked to poor sanitation.
Defecating outdoors increases cases of diarrhea, parasitic worm infections and other public health scourges that experts say contribute to childhood stunting and malnutrition.

Thank goodness India has a lot of computers to lessen the load.