a statistical anomaly ... not 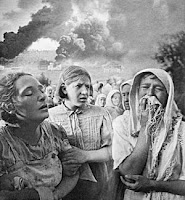 As I understand it, Iosif Vissarionovich Dzhugashvili, the man who would come to be known as the Russian dictator Josef Stalin, at one time denied he had said it but later was willing to shoulder the responsibility for the observation that "a single death is a tragedy; a million deaths is a statistic."

With a widely-accepted figure of Russian military and civilian deaths at roughly 20 million during World War II, you can sort of see why Stalin, the man who oversaw Russia's efforts during the war,  might adopt the observation as his own. Not-so-widely cited are an estimated 40 million Russian dead during Stalin's wartime tenure.

What is beyond processing or comprehending and yet cannot be eradicated -- as for example, 20 million anything, let alone people -- seems to need a handle that will allow the mind to free itself and move on and convince itself that it cares and has been attentive to the world. It is easy to question and critique the hard-assed Stalin, but, but, but....

What about the personal willingness to wrap up the circumstances life presents and create a portable, supportable format ... a statistic, in short? A quick survey of the number of times anyone says "they" or "them" or "one" or "we" in a day offers ... oops ... a statistical overlay for the topic. It's too prevalent to be called naughty or nice, but it is worth noticing.

And against that backdrop, to the extent that it's true, isn't it also true that individuals are willing to sweat their buns off in pursuit of a single goal -- not to become a statistic; to be something or someone worthy of individual attention and, perhaps, accolade. Statistically, others may die or screw up or be blithely parceled out in a statistical analysis, but my passing or the passing of the ones I love is different and, perhaps, a tragedy. The whispered sense that the universe doesn't give much of a shit is fine for others, but moi? The tragedy lifts its insistent head: No, this life more than an easy-peasy statistic, isn't it? I take myself seriously and the universe damned well ought to as well.

I don't want to be forgotten or minimized. I wonder why. I don't want to be "just another" anything and yet the evidence hardly supports any other appreciation. I seem bound to become someone else's statistic and, after all the effort that has gone into this life, I don't like it at all. I am, or work pretty hard at being, a statistical anomaly.

Statistics are toneless, tasteless and flat whereas one life is as full of music and juice and horror and meaning as a green grape exploding between the back molars.

Strange how it is impossible to compass the truth that every statistic is a person; people are important; and yet statistics become an inescapable resting place.

OK, I'll be your statistic if you'll be mine. Someone, even if it's just some number-crunching statistician, needs grist for the mill.

Let's enjoy our grapes and try to remember that just because anyone is indispensable to the universe does not mean the universe needs his or her help.
Posted by genkaku at 8:25 AM