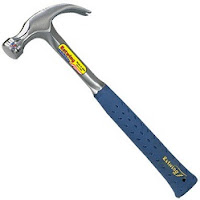 The US firm is one of a small number of clothing companies actively countering the proliferation of cheap wears, where new collections delivered weekly, or in some cases daily, has helped fuel a seemingly insatiable desire to buy more stuff.

More stuff, and made to fail or go out of fashion into the bargain. If things don't fail, it's not as easy to buy more stuff. And a BBC article takes note of a few companies offering durable clothing ... stuff that lasts and can be fixed when it wears down and threatens to encroach on the need/desire/addiction to more stuff.

But there is a paradoxical element involved: Capitalism is based on more stuff, but more stuff never seems to still the craving for more stuff. As my parents no doubt felt about my early longings, I marvel at the stuff my kids can accumulate, learn to ignore and then throw away.

As in the picture above, I have a hammer I have owned for decades. It is a bit rusty around the edges, but that doesn't mean it can't pound nails with the best of them. I like it. Likewise a set of fingernail clippers ... ten, twenty, thirty, forty years and it works just fine. I like it.

It's nice to have something about which, theoretically, anyone might say, "one and done" ... or, at least relatively speaking, "one and done." But I too have mountains of stuff accumulated -- not necessarily based on vanity alone -- over the years. Important once, it is largely crap now. And still I like the idea of creating something that has the capacity to last a bit longer than some plastic automobile or a water heater that, as distinct from its predecessors, falls apart at the least surge.

Ah well, I guess it all gives new meaning to the encouragement, "if you want something done right, do it yourself."