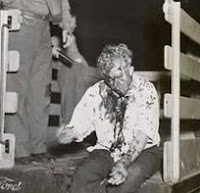 Once they fought battles in which police were liberally employed to stem the tide of workers' rights, unions and any other such Unamerican activities. It took a bit of sacrifice and a lot of blood before the 40-hour work week and other concessions were wrung from the oh-so-American captains of industry in the late 19th and early 20th centuries. Once they became powerful, the unions overshot their mark and dwindled until today membership is about 11.3 percent. Even workers these days can scoff at the idea that a union might actually help them.


As commentator E. J. Dionne has noted, the union movement has traditionally espoused a set of values—solidarity being the most important, the sense that each should look out for the interests of all. From this followed commitments to mutual assistance, to a rough-and-ready sense of equality, to a disdain for elitism, and to a belief that democracy and individual rights did not stop at the plant gate or the office reception room. Dionne notes that these values are "increasingly foreign to American culture".

But now, perhaps, there is a turning of the screw: From no unions to powerful unions to few-if-any unions, now again the need for a communal voice -- even one dubbed socialist or anti-capitalist or anti-American -- has gotten a small boost.


The United Auto Workers union won its first organizing vote at a foreign-owned auto assembly plant in the U.S. South on Friday, in a groundbreaking victory after decades of failed attempts.

Will this small victory herald other victories to come? Will the captains of capitalist industry be chastened in their rush to demean unions through their surrogate Republican representatives? Will workers gather up their courage that is not supported by a vast disposable income and risks the pay-check-to-pay-check existence that many of them live?

I don't know. But I do know I am glad to see the pendulum swing.

But then, be it said, I was raised on Pete Seeger and the Almanac Singers ... as for example in this straightforward bit of union agitation ... Talking Union.
Posted by genkaku at 10:00 AM