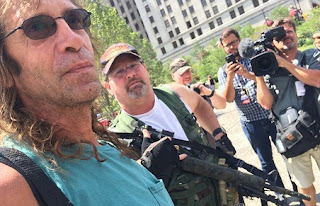 Cleveland police have asked Ohio Gov. John Kasich to temporarily suspend or at least tighten the state's open-carry gun law at least as it would apply to the Republican National Convention that began today. The governor later replied that he has no power to override a constitutional right.


"We are sending a letter to Gov. Kasich requesting assistance from him. He could very easily do some kind of executive order or something -- I don't care if it's constitutional or not at this point," Stephen Loomis, president of Cleveland Police Patrolmen's Association, told CNN. "They can fight about it after the RNC or they can lift it after the RNC, but I want him to absolutely outlaw open-carry in Cuyahoga County until this RNC is over." [emphasis added]

Does anyone else feel that they're reading "Alice Through the Looking Glass" in real time? Wasn't it just yesterday or any number of years gone by that the National Rifle Association proclaimed the right of every Tom, Dick and Harry to have a gun. Not just a "well-regulated militia," but everyone? And the Supreme Court finally agreed? And now, with the laws on the books, those who might be expected to support such constitutional rights backtrack? "I don't care if it's constitutional or not at this point...."

To have a gun and openly carry it ... except when the possibility for misuse becomes too compelling.

All of this is happening against a backdrop of at least two incidents in which shooters have targeted and killed police officers. And those incidents were preceded by a series of killings of black men by police under unclear by certainly suspect circumstances.
Posted by genkaku at 5:50 PM