Former two-term president Bill Clinton, a man remembered in brief as a guy who got a blow job while in office, gave a 42-minute speech at the Democratic National Convention in Philadelphia last night as he stumped for his wife -- Hillary Rodham Clinton -- who will be the first woman president of the United States. Hillary Clinton nailed down the Democrat nomination as its candidate in the 2016 presidential race last night. She, unless I am mistaken, is a good ol' boy in girl's clothes and will prolong America's winning formula of war in the Middle East.

The first woman president. Wowsers, on the one hand! But on the other, quoi donc? 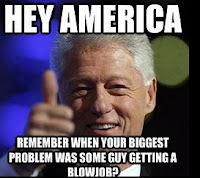 Still, if I were remembered, I think I'd rather be remembered for a blow job than for the carnage and contrived fear that elects and re-elects American 'states(wo)men.' Hillary fought hard and with skill, but for what victory? To beat the sociopath Donald Trump? To outflank liberal Bernie Sanders?

At what point does the good of the nation fit in? Is there a principle or two within sight? I can't tell you how depressing all the talk of "trust" and "hope" is. Like the vice-presidency, it is hard not to put the political swooning where John Nance Garner put the second-highest political office in tha land: "The vice presidency," he observed, "is not worth a bucket of warm spit."

Everything seems a bit like one of those early Japanese monster movies in which the lip-syncing is hopelessly out of sync. OK, sure, we have a woman president. It's historic. Get over it and get to work. Stop living in the past and pretending to speak in the present.