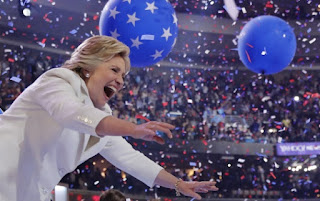 [Reuters] U.S. presidential candidate Hillary Clinton cast herself as the steady leader at a "moment of reckoning" for America, contrasting her character with what she described as a dangerous and volatile Donald Trump.
In the biggest speech of her quarter century in politics, Clinton on Thursday accepted the Democratic presidential nomination for the Nov. 8 election with a promise to make the United States a country that worked for everyone.
"We are clear-eyed about what our country is up against. But we are not afraid," she said.
She presented a sharply more upbeat view of the country than her rival Trump offered when Republicans nominated him last week, and even turned one of Republican hero Ronald Reagan's signature phrases against the New York real-estate developer.
"He's taken the Republican Party a long way, from 'Morning in America' to 'Midnight in America,'" Clinton said. "He wants to divide us - from the rest of the world, and from each other."