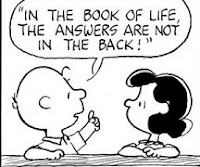 "It was a teachable moment," Bill said the other day after I had told him some story about an experience when my kids were younger ... an instance in which I tried to bring some reality to the childish enthusiasms my kids were displaying. And it worked. And I was pleased with the outcome. And I told Bill about it. And he capped my description with, "It was a teachable moment."

And something inside me got cranky. "A teachable moment" is one of those I'm-in-control lines ... if you can describe it, then you have it under control. My bullshit-o-meter began to whine.

One of my favorite stories in Buddhism is the tale of Gotami, a woman whose baby died. She was heart-broken. Carrying the dead baby, she went to Gautama -- the man most frequently described by academics and monastics as "the Buddha" in Buddhism. Gautama had a good rep as a holy and wise man and Gotami imagined he might revive her dead baby. So she asked him to do so. He said what she asked was impossible and he couldn't do it. She didn't believe him. She asked him again ... and again ... and again. She was so desperate. But again and again and again Gautama said he couldn't do it.

Finally, however, Gautama changed tacks. He told Gotami to bring him some mustard seed from the first house she came to in which no one had died. And so, given her homework, Gotami set off. She knocked on door after door. The good people she met were all willing to give her the mustard seeds she requested, but when she asked if anyone had died in their house, they looked at her as if she were somehow deranged: Of course, someone had died there -- what did she expect?

Finally, Gotami returned to Gautama. She had learned a lesson. "Enough with the mustard seed!" she said approximately to Gautama. "Give me the teachings!"

Like Bill, the well-lubricated mind can leap on this tale like a cat on catnip! -- it was a "teachable moment," right? And this strikes me as OK for TED talks and religious instruction. But in reality ...?

In "The Varieties of Religious Experience," if I am not mistaken (and it has been a long time since I read it), author William James takes up the matter of religious conversion. And being a man with intellectual balls, he tells the tale of a man who had had a legitimate conversion experience ... when he was converted to gambling. (I can't believe I am making this up. It gob-smacked me at the time. But I haven't got what it takes to look it up and prove my point. Still, whether true or fabricated, I think it is true....)

A "teachable moment" is a slick observation. Gotami learned her lesson. But if the mind summons up the courage, I 1. think that any moment is precisely the same and 2. that what it teaches is not necessarily what the seeker set out to find: There is nothing to say that Gotami might have journeyed far and wide and come up with some other lesson ... maybe gambling for all I know.

And it is important to find this land of leeway and to be at peace with it. The most profound teaching can reach up out of any circumstance and offer profound insight ... or, equally, provide no insight whatsoever ... and it amounts to the same thing. Every moment is the "teachable moment" the well-lubricated mind insists on naming. Whether anyone will be taught or not is not a 'given' of some sort.