Was there ever a police state that did not anoint itself with the best intentions?

Was there ever a police state that did not owe much of its verisimilitude to the reports of an alarmist press that claimed to have the citizenry's best interests at heart, but evinced few and flimsy facts surrounded by a drumbeat of frenzied chatter? 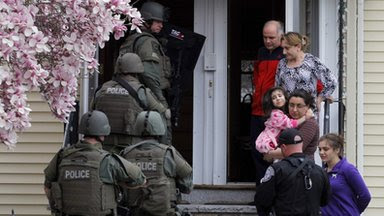 Monday's bombings at the Boston Marathon were really very frightening. Three died and more than 180 were injured. But any honest fear I felt has been compounded by the agencies and outlook of those tasked with the investigation. Fear heaped on fear.

There is relieved jubilation today that the second suspect in the case has been caught.

But the tendrils of implication nag.

I have no intention of moving to Idaho and taking up residence in some well-provisioned bunker. I have no intention of joining some nitwit fringe group that sees conspiracies in every corner. But that does not mean I cannot be honestly afraid of what multi-billion-dollar agencies like the Department of Homeland Security imply for the United States of America. It does not mean that I cannot be deeply disgusted by the frenzied and self-serving coverage offered by the media.

I guess it's nothing new, but that doesn't make it any more attractive or decent or honest -- the willingness to employ fear while claiming the high ground of stamping fear out. Companies, religious institutions, countries ... any number of social organizations use similar tactics. Shame and courage go begging. Fear works better.

I am afraid of the salvation that's being offered and of the salvors who offer it.
Posted by genkaku at 8:51 AM