Yesterday, I was talking with a friend who had gone through much of the same early Zen training as I had, the two of us reminiscing a little about the "naivete" we had both suffered from in earlier times and could sometimes see in others who followed in our wake.

Boy, were we dumber than a box of rocks!

How could we have lacked so much common sense?!

The word "naive" is often used in the way my friend and I were using it ... as meaning lacking in information and common sense; gullible; and, in the case of spiritual endeavor, allowing our longings to lead the credulous, hopeful and enthusiastic charge. 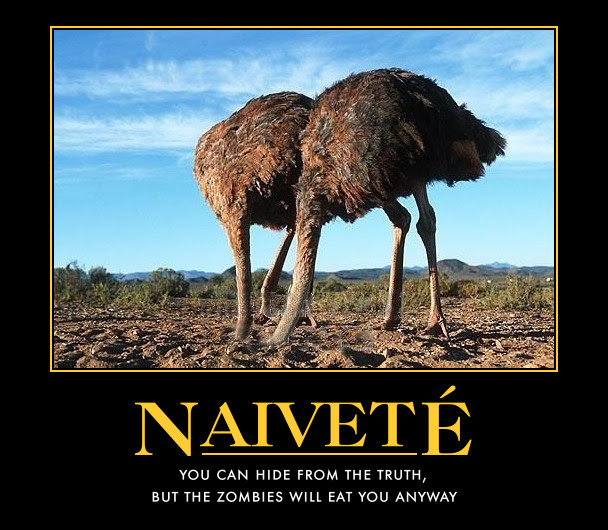 But I think the overtones that frequently accompany the word "naive" are a bit naive. Often, there is a pejorative superiority that hangs in the air as if the one applying the word would never be so stupid as to get his tail feathers singed in such a way. And if the employer of the word "naive" would never be so stupid, well, why should anyone else be that dumb or ill-informed or blinkered?

Thinking it over, though, I wonder if it is possible to start any endeavor without being naive? How could anyone know anything before they actually found out? And the starting point for finding out is invariably a recognition of what is unknown ... of the very thing about which information and proof are lacking.

So, OK ... I am a dummy. Enthusiastic or adoring, perhaps, but still a dummy. How in the wide world of sports could I be anything BUT naive? And more, isn't it that very naivete, that very gullibility, that leads me to make all sorts of mistakes that will then concretely inform whatever it is that is NOT naive?

I think naivete, in its lack of common sense and in its longing and in its willingness, is really quite a good thing. It may be dumber than a box of rocks, but how can anyone know that without first getting his tail feathers singed? The fact that anyone else may know what I don't know amounts to a fart in a wind storm, no matter how 'wise' or lubricated the explanations.