looking for a beggar

Yesterday, I went looking for a beggar here in privileged Northampton. I wanted a photograph to add to a somewhat acid column I submitted to the local newspaper and which they seemed willing to run. The theme of the only-half-tongue-in-cheek piece is, roughly, let's make begging a statutory right... as in life, liberty, the pursuit of happiness ... and begging.

I drove past the supermarket parking lot where a woman occasionally stands with a cardboard sign around her neck that asks for donations. She wasn't there. I drove to another spot, a traffic island where others occasionally solicit hand-outs from passing cars. No luck. Finally, I gave up and drove to Main Street, although finding a parking space on Saturdays is hard.  And right away I spotted her. 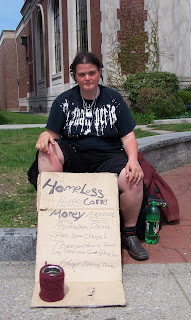 She was seated on a low wall, reading a book in the sunshine. In front of her were a two-pound coffee can wrapped in red terry cloth and a cardboard explanation of her plight. The coffee can was about a third filled with loose change. The cardboard said she was homeless and needed money.

I approached with a vague sense that I was being manipulative, profiting from the sorrows of others. But I set my concerns aside and told her what I wanted -- a picture of her to accompany an article I had written about begging. For the picture and a signed permission, I would give her $5.

She looked at me out of alert, blue eyes. Her face gave off an underpinning of open, lively prettiness that contrasted with the Master lock held on a chain around her neck and the lumpen-proletariat, large or extra-large, black T-shirt and shorts she wore. She got the gist of what was happening and immediately searched her backpack for a pen with which go give her permission. She took the money without remark and shoved it in the right front pocket of her jean shorts.

She claimed the unlikely name of Raven Storm, said she was 30, and replied that she counted "the streets of Northampton" as her home. Then she sat still for two or three pictures. If I had been a reporter, I would have asked her a bunch of questions, not the least of which might have been whether she had made up the name she gave me.

After the photo shoot, I came home and shipped the picture and the permission off to the newspaper editor with whom I had corresponded about the column. He had asked me to make some corrections, which I had, and that suggested to me that the newspaper would run it, though when was never stated. I hoped that the picture might make it in under the wire of publication necessities ... a long-shot, perhaps, but worth a try.

Only after I had done what I could for the article did I return to my whispering sense of profiting from someone else's misfortune. The transaction had been straightforward, but still ....

And then it occurred to me to wonder how long it had been since anyone had paid Storm Raven to do a job that only she could do ... to exhibit an expertise that only she had ... to be, in whatever small way (even a manipulative one) the center of attention. She was the only Storm Raven there was -- beggar or queen, no different -- and for a brief time, that was important to someone.

I was not entirely mollified by my reasoning, but I had to admit it probably deserved to be part of the mix.
Posted by genkaku at 7:10 AM