In 1999, Georges Seurat's pointillist painting commonly referred to as, "Sur la Grande Jatte" sold at auction (with all the commissions and other merchandisers' charges added in) for $35.2 million. 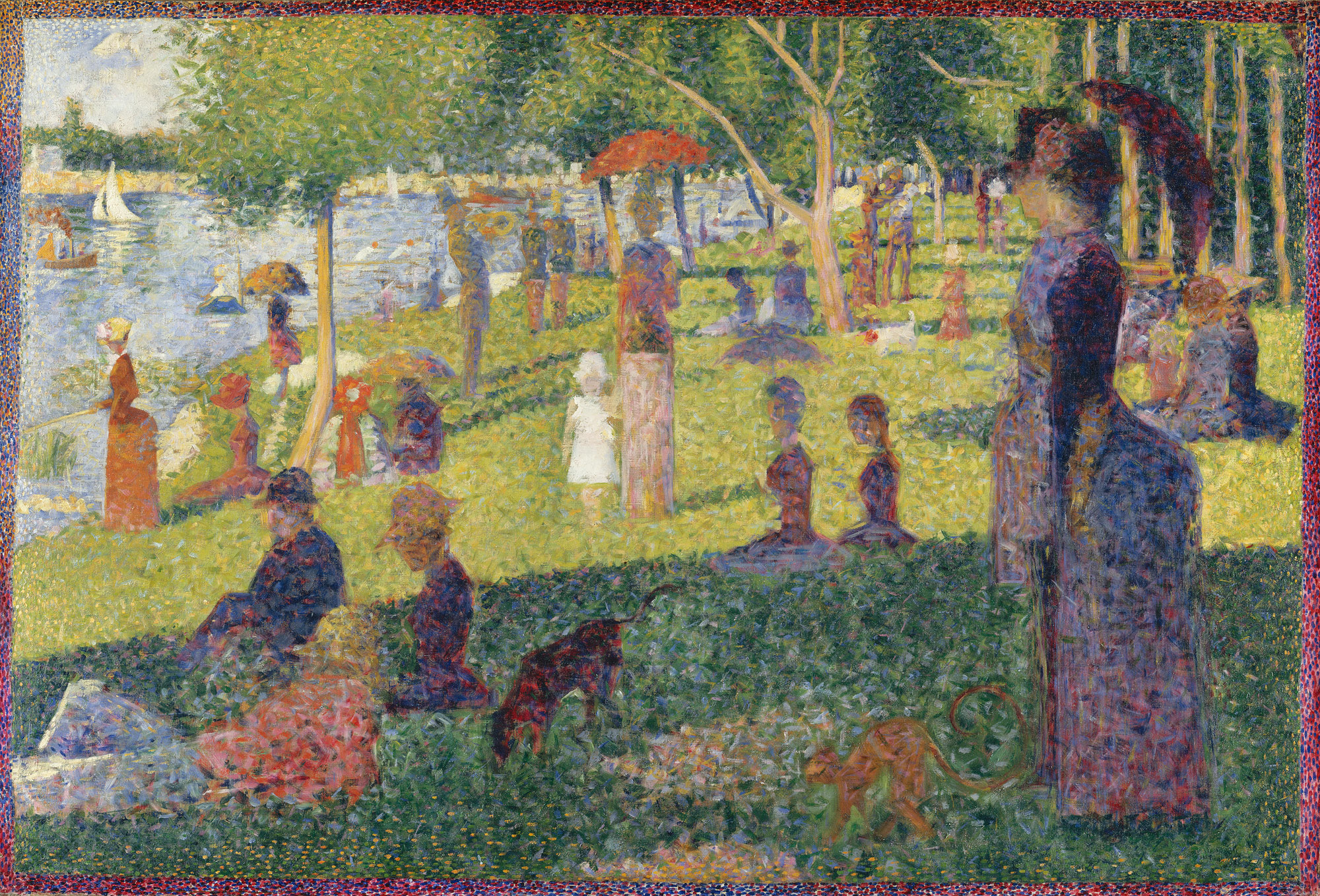 Yesterday, I drove up to New Hampshire through a multi-trillion-dollar landscape.

It's spring here and my son had been to a Saturday track meet where someone stole one of the athletic shoes he uses when throwing the discus. Just one. Angus wanted the other pair of shoes that was hanging around the house here, so I drove them up to him in New Hampshire and we had lunch.

The countryside was full of the kind of mystery that not even Seurat could capture and no merchandiser could put on the auction block. Spindly tree branches, winter-wasted as an old woman's arm, were not yet exactly in leaf, but displayed an ungraspable glow that even the tiniest of Seurat's paint points would have overstated.

The golf ranges and ammo stores and used car lots whizzed by on either side of my route. Were they enhanced by or did they themselves enhance this moment that whispered and was gone or was gone before the whisper could be spoken?

The pale pink maples, the not-exactly greening grass ... everything seemed to be on some perfect cusp between concrete reality and reaching and wondrous imagination: Were the pinks actually pink or did I simply want them to be that way? Whatever the truth, it was lovely and free and outside the reach of even the most canny merchandiser or expert painter or mewling philosopher or spiritual adept.

Maybe that's what sends artists into the much-nourished realms of sorrow ... beauty is for free and cannot be touched and yet here they were putting a price of time and effort and attention on ... on ... on ... on something that is eternally profligate in its giving and yet refuses to be thanked or praised. Even "free" is saying too much: You can enjoy life, but you can't have it.

Nor are artists the only ones ....

Angus told me that not only had he had one shoe stolen on Saturday, but that he had also had a big-time downer on the field. Of his five discus throws, he fouled out on four. He had gone into the meet seeded as number one ... and then everything had turned to shit. He didn't go into the gory details and even his one good throw won him a second place in the meet, but still ... seeded number one and throwing like some rank beginner.

How alluring it is to imagine being at the front of the pack, "the best" at one thing or another. Doesn't everyone long to be Number One in whatever they're doing? But being Number One is delicious only up to the moment when Number-One-dom is attained.

Being Number One is merely a matter of applause and does not reflect any honestly satisfactory reality. Only a fool could lead a life based on applause. But still, reaching for Number One is like going for the Golden Fleece or a druggie who has just scored a much-needed dime bag. What I wouldn't give to be "the best." And yet when the laurels arrive, what is it I hold in my hands or set upon my head?

This is no joke. Or anyway I imagined that Angus went into his meet carrying some of that freight. If everyone seeds you as Number One, then you must be Number One, mustn't you? But what does Number One do for an encore? How does he re-establish his Number-One-dom-ness? How does he keep the applause going? Does he apply patches where the boat threatens to sink or does he learn that all boats sink ... that's why there are an endless array of boats?

It wouldn't surprise me to think that Angus was carrying some of this baggage when he threw the discus and threw it poorly: Anyone can enjoy being Number One, but believing it's true is an invitation to some very painful confusion.

No one can put a price on what is simply free. A single dot in a Seurat painting, a maple tree by the side of the road, a mis-thrown discus or a perfectly-thrown one ... it's free and profligate and delicious ... but that's no reason for anyone sell their lives like some flint-eyed sissy of an art dealer.

Being Number One is a matter of coming in second.

Better to be Number One.
Posted by genkaku at 8:56 AM