Joe, my neighbor across the street, walked over and asked me yesterday if I would participate in a homework project he had. Joe retired a year or so ago and is currently taking classes that will result in a certificate attesting to his ability to counsel the aging, an activity he already engages in at his local church. Joe wants to hone his skills and get his ticket punched. 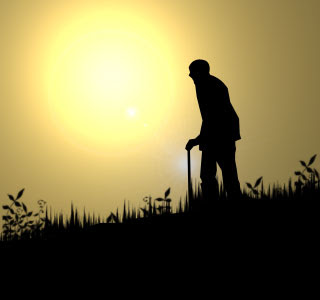 The homework consisted of interviewing five people and then writing a short paper. Joe emailed me the questionnaire that constituted the interview. It was entitled, "Older Adult Interview: Social Roles and Relationships in Old Age." The questions, eight of them, felt as if I were being questioned from behind bullet-proof glass ... asked by someone who was convinced that old age could somehow be improved and that they had a handle on how that might be accomplished. The questioner sat on the other side of the glass as if trying to keep the leper of his own old age at bay.

Who knows? Maybe such improvements can be made. Old age brings with it a variety of circumstances that cannot be escaped, but maybe they can be ameliorated. The emphasis deserves to be placed on the word "maybe." Reduced energy, a wispy, misty sense of loss, dwindling social connections, a feeling of ostracism, financial nooses, aches and pains, a sense of floundering ... well, it goes with the territory and perhaps such nostrums as "keep busy," "do something for someone else," "volunteer," "exercise," "watch your diet" ... it all sounds good and sounds caring and sounds reasonable.

The only problem is that old age is not reasonable. Old age is just a fact and when have facts ever kissed the ring of sweet reason, sweet caring or any other sweetness? Facts are unimpressed by optimism or pessimism. They're just facts.

The questionnaire seemed to imply that the matter of old age could be approached in the same way anyone might approach learning basketball or French or driving a tractor: Just apply the easy-to-follow instructions and voila!

The question that really brought me up short was, "Do you (or did you) have any role models for successful old age?" The notion that anyone could be a success at what they were already a success at (being old) struck me as preposterous. And the suggestion that anyone might have a role model (some Mickey Mantle or fluent French speaker) to mimic ... well, I suppose in some perverted way, this might be possible ... it sounds so reasonable and caring, right? ... but does it really compute?

Well, Joe needs to get his ticket punched. He needs credentials as a counselor. Like shrinks and stock brokers and probably anyone else climbing the ladder of profession or satisfaction, there are accomplishments that need acknowledgment from others. Everyone wants to eat, so sometimes credentials are important.

And sometimes credentials do in fact prove something. But more important than what they prove is what they don't prove. Credentials cannot definitively -- as from behind bullet proof glass -- prove entirely reliable in the subject matter they address. At best, they can make suggestions, offer possible frameworks or tools. A man with a law degree may be credentialed in all sorts of ways and yet the human panorama that the law addresses is always larger and more complex than what can be codified, described or corrected.

And the same is true for individuals who may fall into the trap of believing their own publicity -- the accomplishments and failures in which they wrap themselves as a means of credentialing their lives. It's an exercise that is bound to lead to dissatisfaction and dis-ease. As comforting as credentials may seem to be and as supportive as a collection of failures and successes may be, still there is something left out, something elusive and yet certain. Many address this sense of uncertainty by simply adding on more and more credentials, more and more reassurances, more and more answers from behind bullet-proof glass.

It's not that credentials are somehow bad. And it's not that self-defining doesn't have its uses. But credentials need to be acknowledged as incomplete. And the question needs to be asked, what then is complete?
Posted by genkaku at 8:33 AM