It was a weekend, no doubt, when Joe and I tooled south in his red MG convertible. We didn't know where we were going, but we wanted to get away ... anywhere would do as long as it was away from the installation where we spent six or seven hours a day, five days a week, in the pressure cooker that was then called the Army Language School. The training was intense enough so that the army made reference in its welcome-aboard literature to the possibility that we, as students, might feel suicidal urges. When I first read that, I smiled. After a couple of months of training, I wasn't smiling any more ... eight students per class ... never knowing when an answer might be required ... learning German in 1962 ... attention! attention! a-fucking-ttention!

Anyway, it was the weekend. No classes. A time to escape to ... to ... well, Joe and I didn't know where we were going. It was enough to be going away ... south out of Monterey and down the California coast towards the egregiously well-heeled community of Carmel. Joe, who came out of an impoverished and truly dysfunctional setting in Tennessee, liked classy stuff of the sort Carmel or his red MG or his Jack Daniels or his love of "Madame Butterfly" provided. But I don't think he was after anything classy that day. We were just going away.

Shortly before we reached Carmel, a dirt road cut away to the left, heading off into the parched and scruffy hills that contrasted with the lush greenery along the Pacific Ocean to our right. Who knew where it went? We certainly didn't, but we did know the unmarked road seemed to offer an even richer sense of away. We took it.

The road led across perhaps 200 yards of flat land before curving left as it reached the base of the hills. And coming around that corner, we were instantly rewarded for our risky, I-don't-know-where-I'm-going spirit. Around that corner lay a small farmhouse in front of which, and spilling out into the road we were traveling, was a small herd of ... wait for it! ... peacocks, for Christ's sake! The birds ambled and shambled and dragged their brilliant riches behind them with the same bored assurance a mother might invest in holding her child's hand. We had to slow down. Hell, we wanted to slow down! It was like entering a dream whose story line was missing but whose delight was distinct. Peacocks! 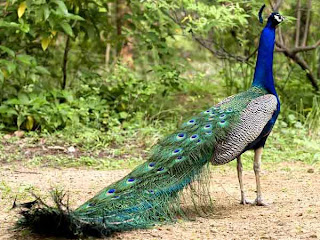 We edged through the herd and began to follow the dirt road upward into the scrub dry hills. Up and up and up and up. No signs told us where we were going, but the road must lead somewhere, mustn't it? It was hot and grew hotter under the bright sun ... up and up a one-lane dirt road. Occasionally, when a sharp corner appeared, Joe would slow in anticipation of someone coming from the other direction. But there was no one.

At about 5,000 feet, a sign directed all traffic that planned to go further on our road to check in with the fire warden. Obediently, we pulled into a short driveway at the end of which stood a fifty- or 60-foot tower. The guy manning the tower gave us the cook's tour of his aerie, which looked out over an enormous swath of scrub hillsides. He had binoculars. He was alone on the job and, while pleasant enough, had the kind of brusque directness that people who live alone can acquire. He understood our desire to explore and get away. He wanted to know how long we would stay. He wanted to keep an eye on our potential either to start fires or get lost. And when he heard that we were at the language school, his face took on a playful wryness. "Gonna be spies, hunh?" he said with teasing amiability.

After signing in, we climbed back into the MG and headed out, this time descending instead of ascending. Down and down and down we went into hills that seemed to capture and magnify the heat all around us. From the warden, we knew by then where our road was leading -- a place called Tasajara Springs, a watering hole for those who found succor in hot springs and a place whose telephone number was TAsajara-1 ... TA-1.

By the time we pulled into a small parking lot near the collection of wood-frame buildings, the heat had taken on a force and insistence that wiped other considerations aside. There was a rectangular, nothing-elaborate swimming pool shimmering about 25 yards from the car and, without thinking, I opened the door and sprinted towards it. I didn't care who cussed me out for trespassing. This was important -- viscerally important. It was only in the mid-flight of my dive towards those cooling waters that I realized I had forgotten to take off my wrist watch ... oh well, too late now.

Joe and I stayed the night. I don't recall anything about the owner of the place or the guests I probably talked with. At dinner and afterwards, there was an aging piano player who had come to San Francisco in 1898 and had been poor and who had wrapped his legs in discarded newspapers as a means of keeping warm when he slept on park benches. He played old-time popular music that everyone might sing, or at any rate hum, to. And when he had finished for the evening, he gathered all the children around and gave each of them a penny.

In the cool dawn that arrived the next day, I ambled around the grounds before breakfast. A small brook bubbled quietly downhill from the swimming pool. Its waters nourished the green trees along its banks and then ambled into the I-don't-know-where ... someplace away. And as I stood idly, it seemed to me that Tasajara was a blessed place, an oasis without any of the oozing folderol that sometimes accompany words like "blessing." The blessing was all over me like body odor -- quiet, consuming, insistent and so obvious as to be downright boring.

It was a blessing and in that moment I swore -- really swore -- that I would come back to this place before I died.

Well, I didn't make it and now that Tasajara has become a Zen center, my desire to return is far less insistent. In fact, even if I could, I doubt that I would go. For one thing, blessings that count themselves as "blessings" make me blanch. And for another, the pedal-to-the-metal longing to get away has gone away.

I'm not sure where it went.

Maybe there are peacocks there.
Posted by genkaku at 9:13 AM