the democracy of fear

Pfc. Bradley Manning, 25, went on trial yesterday and the trial continues today. He is accused of the single greatest release of classified documents in U.S. history. Odds-makers figure he will get 20 years.

He is accused of "treason."

Of "giving aid and comfort to the enemy."

intelligence analyst to Wikileaks, an organization dedicated to more transparency and less convenient secrecy in government.

Wikileaks then handed the data to the New York Times and a variety of other news outlets which published portions.

Different from Manning, those news organizations have had no charges of treason or other governmental infraction leveled against them.

Pfc. Bradley Manning has been incarcerated for three years while awaiting the "speedy trial" the American legal system is said to provide.

Pfc. Bradley Manning has been accused of endangering the lives of Americans. Not one concrete and verified instance of such endangerment has been put forward as far as I know. The government claims it cannot afford to give the details of secret ops. But if it cannot afford to produce tangible evidence, how can it afford to put Bradley Manning on trial?  The government case seems to rest largely on a trust-us set of allegations. American security from threats depends on secrecy ... so trust us -- Manning (but not the New York Times or other news outlets) did a bad thing.

Trust us while we ban the photographing of the flag-draped coffins returning from Iraq or Afghanistan ... under cover of 'family considerations.' Trust us while we hide a video of an American gunship mowing down journalists and innocent Iraqis. Trust us to keep secret what needs to be kept secret in the 'national interest' ... needs which seem to dovetail so neatly with private or political desires for secrecy.

Strangely -- or perhaps not -- Manning's predicament has excited more interest overseas (he has dual citizenship based on his mother's Welsh nationality) than at home. Britain and Europe are speaking with louder voices than the America in which Manning is being tried.

Trust us ... you should be afraid.

And the invocation of fear works, at least for me.

I am no-kidding afraid of the government that encourages me to disparage or be afraid of Pfc. Bradley Manning. The 'democracy' of fear is vile. 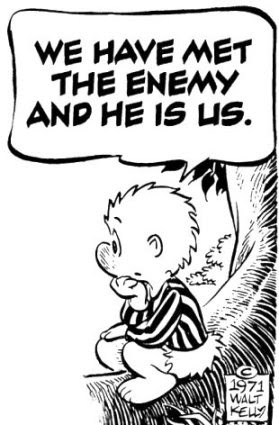