"Tyranny" is one of those five-dollar, fire-cracker words that, like "terrorism," seems to gain momentum and force not so much according to a quantifiable yardstick but rather according to the number of people who claim to know what they're talking about and, more important, agree with each other. It's real, it's painful, it's outraging, and it's sometimes enough to spark bloody confrontation. 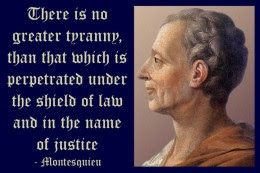 The trouble is that one man's tyranny is another man's benevolence. Like the "cults" that spring up out of socially-accepted religious frameworks, "tyranny" seems to allow no certain delineation when examined closely. What was "intolerable" to the American colonists who rose in sometimes-reluctant revolution, was "tolerable" to their British lords. Yet there were elements in each camp who recognized and were willing to discuss the imperfect boundaries of their positions. "Tyranny" and "benevolence" were important but lacked the stick-pin definition that would create an honest and quantifiable boundary.

Perhaps the easiest -- but not the only -- broad-brush dictionary definition of "tyranny" is:


dominance through threat of punishment and violence

And "tyranny" does seem to have one agreed-upon aspect within its cheering-section definition: Tyranny always relates to the other guy -- the someone or something else that is imposing his/her/its will ... on ... me and my friends who are no longer willing to be ground beneath the tyrannical boot.

The dictatorship of a Joseph Stalin or an Adolph Hitler, the mass murder in the Cambodian killing fields ... history supplies an endless array of examples of tyrannical activity. But tyranny can be as subtle in one instance as it can be vicious in another. Judging by the fallout, the word can be applied to situations of employment or race or spousal relationship or economic policy or political maneuvering or any other less-literally-bloody situation. On examination, the word seems to fall of its own weight and resolve itself in the punchline of the 1976 movie "Network:"


I'm mad as hell and I'm not going to take it any more!

I can see nothing wrong with rising up against the anguish imposed by one sort of tyranny or another. The anguish can be as clear as the word is ephemeral. But I balk when the uprising relies for its force on the unexamined cheering of others. When I'm mad as hell and you're mad as hell and we're both mad as hell about approximately the same tyranny, then perhaps we can join forces to combat or overturn that tyranny. But not to examine and take responsibility for my own actions and reactions strikes me as a tyranny of convenient ignorance.

"Everyone says so" is hardly a responsible or peaceful lifestyle. Like those who proclaim "peace" as the opposite of "war," this way -- the way of "everyone says so" -- merely nourishes the fields of the next war, the next tyranny. Anguish is no joke and deserves a potent response, but without examination or responsibility ... well, it's not my cup of tea.
Posted by genkaku at 9:09 AM