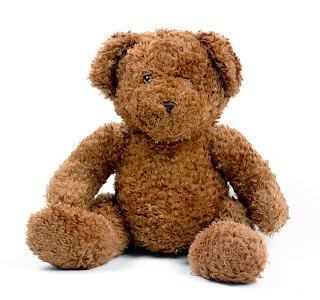 -- Somewhere on TV, for just a few seconds, a young girl stood under a canopy that sheltered the front stairs of her house. She stood in the middle distance. Her features were not visible through the pelting rain. She wore a skirt as if wherever she was going required her to look nice. She seemed to be in the 7-9-year-old range. Behind her, torso hidden by the canopy, was the skirt of what I instantly assumed was her mother. The rain was fierce, but  there was no escaping the need to go out into it.

Against the girl's chest, held with a protectiveness that was at once off-hand and intimately important, was a teddy bear. The girl would protect the bear even if she could not possibly protect it. Rain or no rain, this was her heart, this was her love, this was her life. The matter was as close to her as her breath ... so obvious that it needed no attention. Only an onlooker like me could be touched ... imagining as I did that she would protect the bear and the woman standing behind her would protect her. Each would fail in the face of the pelting rain, but success and failure were not the important part. This was just life, just d'oh, just plain ... just vital.

I wonder if what is honestly precious is, by definition, boring ... too obvious to sing about ... leaving no room for anything but life.

-- I wonder if, in future, people will look back on religion or spiritual life as a quaint compulsion ... look back with the affectionate eye anyone might cast on a young girl with a teddy bear. Who would not understand the sometimes ferocious and intricate love that had swelled the music, but, from this latter vantage point, how quaint. All that tussling and wrestling, all that concern about "compassion" or "clarity" or "emptiness" or "suffering" ... well, fershur! How sweet. How possible. How imperative.

-- And for all that, there are songs to be sung. Teddy bear songs. One I always liked was "Ramblin' Boy" by folk singer Tom Paxton. The example tacked on below is the least-affected version I could find on Youtube, but its somewhat cardboard-y staging is a bit off-putting. Best, I think, to close the eyes and just listen to this scent of the Teddy bear. Who is not a ramblin' boy as time passes?