the fear factor in Buddhism 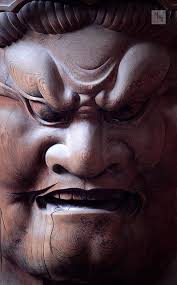 Is there anyone who doesn't have something that scares the pee down their leg? I mean, sure, there can be young military officers who proclaim "no fear!" but those are the guys who get their troops killed in order to make their point ... a poor and arrogant trade-off if ever there was one. My guess is that they're just scared of fear and bereft of means to allay it. No biggie, but I try to steer clear of people like that ... the ones whose altars are bathed in the blood of others.

Did it ever strike anyone else as strange: Keen-eyed observers can call Republicans out for their manipulation of the electorate's fears, using those fears as a means of feathering their centralized-power

nests and institutions under the guise of patriotic caring, and yet seldom does a hellfire-and-brimstone Christianity (even the subtler sorts) get called out on similar grounds... you're gonna fry when you die ... unless, of course, you see things my way.

Well, what Republicans and Christians might embrace is not something I can do much about. I doubt if they're alone.

What chewed my gum this morning were the subtle and gross fears that Buddhism can evince. I'm talking about practicing Buddhists, not the philosophically adroit. Everyone has something that can scare the pee down their leg and Buddhism is not somehow exempt from that warm and sometimes shaming trickle. Or anyway, that's my experience.

How many Internet bulletin boards or open lectures -- and most important, individual minds -- are not tinged with fear? Gotta get rid of attachment; gotta be more compassionate; gotta be more humble; gotta immolate the ego; gotta attain enlightenment ... etc. The alternative is to slip back into old and hellish ways in which this life was littered with examples of dissatisfaction and uncertainty... a hell realm that becomes more and more insufferable (read, deluded) as time and practice progress. Get thee behind me, Satan!

As a countermeasure, practicing Buddhists slip on the Buddhist robes, both within and without. They practice hard. Really -- practicing Buddhists work very hard. They learn what's desirable and undesirable in thought, word and deed and (subtly, perhaps) attempt to shield themselves by holding on tight. "I am a Buddhist." Or, if they don't try to shield themselves, I know I have and might yet again. Fear can send the pee down my leg and being afraid has put a fire under my butt in the past. Of course it's not called "fear" -- it's called something more sensible and digestible and acceptable and praise-worthy ... a desire to save all sentient beings, a longing for enlightenment, a canny awareness of attachment, a sense of emptiness ... etc.

Unless anyone wanted to create a shining institution or a well-feathered nest, fear doesn't work very well. Or rather, fear works fine, but relying on it doesn't. Fear is a perfectly good descriptor, but a cheap date as a point of leverage. As far as I can see, Buddhism is not about fending anything off or consigning it to some vanishing point in outer space or finding relief, whether in smarm-talk or fiery sermon. Buddhism is just about being alive and being awake, two things that only a fool would bother fearing.

It is about courage without "finding the courage."

Well, I'm not entirely sure what I'm on about this morning, but I guess it has something to do with creating and nourishing the fear anyone might initially wish to escape. Does fear need "fixing?" Does attachment need "fixing?" Does enlightenment need "attaining?" Does compassion require robes ... or no robes either? Is emptiness someplace "else?"

Isn't there a time to leave heaven and hell out of the equation?

As for example when the warm pee dribbles down my leg?