hanging out the wash 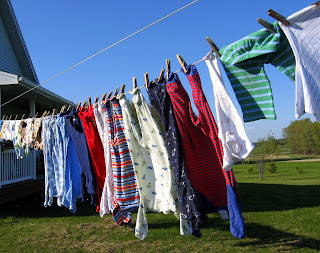 "And what church do you go to, if you don't mind my asking?" Mrs. Smith said pleasantly.

Mrs. Jones reached down into the laundry basket and began pinning a plaid shirt to the line.

"I go to the church around the corner," she replied.

"And what church is that?" Mrs Smith asked. "I thought I knew most of the churches in town."

"I won't know that until I turn the corner," Mrs. Jones said as she idly reviewed her handiwork.

It is pleasant, supportive and warming to travel among friends. Somehow individuals are buttressed by consorting with those who are like-minded. I am more me as long as I am with you. I am at peace and at home and woe betide a world that threatens my home. Traditions of goodness and of greed equally encourage the finding of a collective resting place, a place of assurance and reassurance: Mark the spot! Raise the flag! No need to travel further. I have already traveled far. Let me rest in this reassuring sunshine.

And yet, no matter what serenity and assurance and comfort is gathered around the shoulders like some goose-down quilt, still there is the cold ... the places and circumstances against which this place of rest was fashioned in the first place. How can there be an assured rest without resting in the lair of that which never rests? How much real sense does "peace" make when it is merely the absence of war?

Turning up the volume of virtue, the conniving realms of bliss, hardly fills the bill. Yes, I have traveled far and could use a break. I love to be among friends. But the church around the corner will not be denied. Resting and nesting ... I can wish and proclaim to my heart's content, but the problem is that proclamations don't assure peace.

One of my favorite sillies -- a silly that is dead serious -- is this oldie-but-goodie ... told before, repeated again:

Once upon a time, there was a little bird who refused to fly south for the winter. His friends cajoled and coaxed and told him he was being a fool: He would freeze to death. But the little bird was adamant: He wasn't going and that was that.

The other birds took off and the little bird sat on his bough. But pretty soon, the cold winds began to blow and the little bird began to re-evaluate. Finally he decided he had made a mistake and took off, heading south. But winter had gained its footing and the snow and hail fell. It was very, very cold. The little bird exerted all of his energies, but ice began to form on his wings. It was cold and hard to see and he was running out of energy.

Finally, he was spent. He knew he was a goner ... and he plummeted to earth, where he landed in a cow pasture. There he lay, breathing what he was convinced was his last. He waited for death.

There are three morals to this story:

1. Not everyone who shits on you is necessarily your enemy.

2. Not everyone who gets you out of the shit is necessarily your friend.

3. If you're happy in your own pile of shit, keep your mouth shut.
Posted by genkaku at 7:05 AM