For the purposes of brevity, I will call it "the sublime." 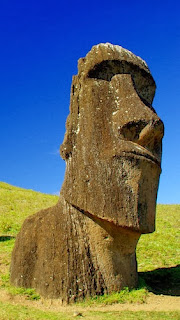 Or perhaps The Sublime is better. Capital letters without quotation marks lends a certain huge and rooted and incontrovertible quality, sort of like one of those chiseled statues on Easter Island or the granddaddy of all redwoods in a California stand.

Yesterday, I spent three or four hours reading a couple of historical essays in the making. I had more or less promised one of the authors I would and so I did ... and was exhausted by the effort -- literally, physically exhausted.

The essays concerned the intersections and embraces of socio-religious thought before and during World War II. The settings were roughly in Germany (in one essay) and Japan (in the other). Christianity played a role (Meister Eckhart, for example, but not much Jesus) as did Zen Buddhism and expositors like Karl Dürckheim and D.T. Suzuki. This description does little or no justice to the essays themselves, which incorporated what was clearly a lot of hard and careful work as they deconstructed the mind sets of people who credited The Sublime and did what they could to make it fit and elevate and be part of the chaos and horror and national pride that was to become World War II.

In my exhaustion, what I came away with was this:

How human it is to seek or long for the twinkly, sparkling realms of The Sublime. Utterly, utterly human. Touchingly human. The Sublime is the ineffable, the just-out-of-reach, the relief, the brightness, the after-death cordial, the beyond-whatever-is-beyond, the balm without thorns, the warming light that stills all doubt, the perfect smile, the enfolding love, the clarity that carries with it a soupçon of flavorful fear, the answer in a land without questions, the perfection that sloughs off any notion of perfection.

Christianity and Zen Buddhism both tap into what interests me -- the quite personal longing to make sense of things and find peace in whatever The Sublime might be. Institutions and philosophies and religions may tap into the human petitions for The Sublime, but in essence, The Sublime is a quite personal longing -- a longing that arises before the institutions began selling their wondrous wares or I began writing this blog post. That's what interests me.

And in my post-essay-reading collapse, what occurred to me was this:

The search and yearning for The Sublime is not foolish because, as its critics might claim, there is no demonstrable, empirical evidence. It is, so to speak, foolish in its own terms, sort of like chaining yourself to a fire hydrant as a means of making a much-desired trip.

To seek The Sublime is to assure disappointment.

This is not to suggest that The Sublime is simply a fairy tale or unworthy of serious consideration.

It is to suggest that seeking The Sublime is at best a wonderful warning. At worst, it is a fool's errand.

Do not seek The Sublime. If there is a recognition that The Sublime is being sought, that is a sure warning that things have gone awry.

Do not seek The Sublime.

But rather, let The Sublime come to you. Lead and attentive and responsible life and if, by chance, The Sublime knocks on the door, then welcome it as you might any other friend or circumstance.

Welcome it with open arms and then, for Christ's sake ...

Go about your business.
Posted by genkaku at 7:21 AM