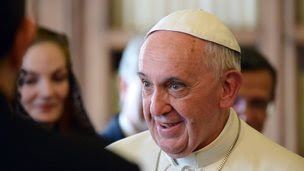 Pope Francis issued an 85-page appreciation of the Roman Catholic Church on Tuesday. It was not immediately clear if those within the Vatican appreciated it.

"I prefer a church which is bruised, hurting and dirty because it has been out on the streets, rather than a church which is unhealthy from being confined and from clinging to its own security," he wrote. "I do not want a church concerned with being at the center and then ends up by being caught up in a web of obsessions and procedures.
"More than by fear of going astray, my hope is that we will be moved by the fear of remaining shut up within structures which give us a false sense of security, within rules which make us harsh judges, within habits which make us feel safe, while at our door people are starving and Jesus does not tire of saying to us, 'Give them something to eat.'"