in the wake of justice

Skitter-scattering and tick-trickling through the mind like brittle leaves in the autumn breeze:

-- Unless I'm wrong, Plato argued in "The Republic" that justice consists in each man's doing his job. Karl Marx harmonized, "From each according to his ability to each according to his need(s)." And Christianity, like communism, casts a warming, wondrous light in its seed ("love thy neighbor as thyself") and bears fruit that can be bitter and brutal indeed. 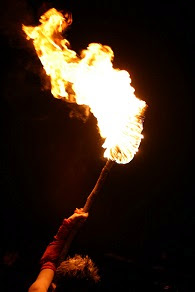 -- A fellow named Henry Giroux was on the Moyers & Company TV show last night. Giroux is described as a scholar and author and he had a very peppy and persuasive delivery, one perfect for an old lefty like me. Said the Internet promo for the interview: "Scholar Henry Giroux says America's current political system is leading to a culture where people are so focused on surviving, they become like 'the walking dead.'"

Giroux described the sodden, grinding atmosphere of a culture in decline very well, I thought. The me-first, merchandizing mentality of the right has gained a palpable foothold ... in schools, in politics, in employment and the result is a humming anxiety and sense of separation that despises or mourns what was once democracy. Giroux is much more persuasive and articulate in his presentation than I am in my reprise.

But what I took away from the interview boiled down to snippets. If you want to solve a problem, you've got to describe it first. Giroux provided a description and it wasn't pretty. And I searched his words for suggested solutions, actions that might ameliorate or lighten the darkness. He suggested debating be taught in schools ... a very good concrete suggestion I thought. He suggested a third political party. He suggested a coming together of groups and individuals now separated by location and interest (sort of like the Occupy Wall Street movement). He suggested that planting seeds (just the seeds) of change was important. He did not suggest a literal revolution, though he came pretty close. And he probably made suggestions I didn't hear.

And lord knows a 'zombie' nation is depressing ... and lord knows a vision that will encourage improvement is pleasing. And lord knows, I couldn't help but think, that no good deed goes unpunished. The broad and compelling vision that eases pain may be compelling indeed ... and it will require leadership ... and that leadership will be composed of (wo)men ... and the possibility/inevitability of bitter fruit to grow with the sweet is inescapable ... and recognizing this, the only questions that suggests itself to me is, "Which will you choose -- a coma of inaction because any action is bound to bear some bitter fruit -- or an acceptance and recognition that any action -- bitter fruit and all -- is better than none."

I like motivational speakers who get out there and suggest another way of seeing things, a way that may or may not lead to some improvements. I liked Giroux. A mindless, self-centered zombie world really is pretty depressing. But I also like La Rochefoucauld's observation (more or less) that "the intelligence of the throng is inversely proportionate to its number." The aphorism may smack of intellectual arrogance, but its aptness remains: Relying on the throng for cherished and cherishing views is a poor support system.

But the only thing that matters much is whether I am willing to correct the errors that my very-good way is bound to leave in its wake. Do good? Sure. But don't forget to acknowledge and clean up the mess.
Posted by genkaku at 8:30 AM