a Palestinian mantram? "I can't breathe" 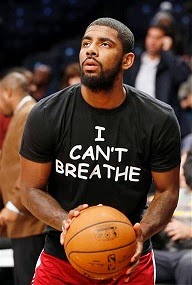 I wonder if some of the same people who have protested the I-can't-breathe-death of a black man, Eric Garner, at the hands of a video-taped white police officer might consider transferring some of their concern to the Palestinians under constant assault by a righteous and who-me Israel.

Amnesty International has accused Israel of "war crimes" in the decimation of four buildings in Gaza. Though the situation is not proved, still there are endless similar and much-excused assaults by the well-armed Israelis taking one step or another to grind down the no-account and comparatively-ill-armed Palestinians, a group which might likewise cry out, "I can't breathe."


Israeli air strikes on four high-rise buildings in the final days of this summer's conflict in amounted to war crimes, Amnesty International says.
Evidence suggested the destruction was "carried out deliberately and with no military justification", a new report by the human rights group found.

The deaths of Eric Garner in New York and Michael Brown in Ferguson, Missouri, have sparked street protests across the country -- the latest being seen on the professional basketball court Monday where several players donned "I can't breathe" T-shirts for warm-up drill.

The racial upset pits civilian rights against publicly-sanctioned police authority. Police do a dangerous job and need to be both vigilant and fair, a hard line to draw sometimes, but not a line that should be ignored. The arrogance of power needs to be called out, publicly labeled as unacceptable, and punished where warranted... just like any other crime.

It is really not enough to imagine that a particular individual or group might do something bad, the U.S. foreign-policy excuse for all sorts of random-but-'righteous' attacks on 'terrorism' that the U.S. allows itself to define without restraint.

No doubt Israel sees an opportunity in U.S. leadership. Palestinians are bad. They think bad thoughts and do bad things. Israel, like police forces everywhere, has the preponderance of weaponry and a boatload of propaganda. They are taking pre-emptive action against an opponent who has proved his villainy in the past.

But the villainy of those who do not categorize themselves among the villains goes unchecked and worse, has the gall to raise its actions to a pedestal of righteousness. The result is people who "can't breathe" ... either metaphorically by subjugation or literally because they and their families are dead.

I think it would be nice if the outrage of the street protests in the U.S. took a moment or two to consider the actual and potential arrogance of America's client in the Middle East -- Israel.