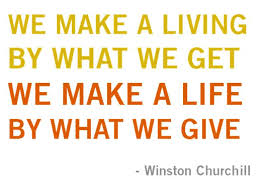 I am a fan of helping those in need, not just because it's sometimes called virtuous but because I consider it human ... to help ... no thanks required ... though sometimes it's nice to hear others say "thanks..." and there are those who cannot do a 'good deed' without insisting on applause.

Socially, "volunteering" has a good rep. So many are in need that volunteering is given a critical bye, sort of like mom and apple pie and sports.

An Associated Press story remarks that younger people -- those who are too dumb or too overwhelmed to pay much attention to the current events of their world -- are better at volunteering than their parents. Or at least a poll finds them willing to say volunteering is important.


Among six civic activities in the AP-GfK poll, volunteering is the only one that adults under 30 rated as highly as older people did.

But I cannot help but notice that those willing to volunteer often provide so-called policy makers with an excuse not to address issues of the public good. A teacher who is forced to bring paper and pencils to a grade-school class allows "town fathers" to sidestep the taxation policies that public education requires: No one can hate you and not re-elect you if you don't make the hard choices ... eg. taxation.

Volunteers likewise cushion decision-makers from food or drug policies and staffing. Let the churches or the Boy Scouts do it. And if anyone needs instruction in the ability to sidestep hard choices -- and let others pick up the slack -- a quick look at the legislative record of the U.S. Congress may provide some insight.

It is human and humane to help out. The 'virtue' of it is hardly the point. But I see no reason not to question the free-ride volunteers can create for those who might reasonably take responsibility for the public good.
Posted by genkaku at 6:34 AM