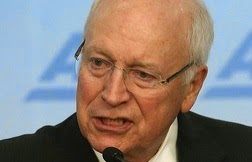 Hurrah for former U.S. Vice-president Dick Cheney, who has parried suggestions that American torture of suspected 'terrorists' (even when innocent) was warranted.

In a bit of irony that is as toxic as it is apostate, this beacon of American exceptionalism has taken a stance that is almost perfectly aligned with the Pakistani Taliban Cheney might claim to abhor ... you know, the group that attacked a school on Tuesday and killed 148 people, most of them children.

Both Cheney and the Taliban, of course, proclaim a true vision which, when it is not shared, deserves to be reiterated through cruelty. It's the principle, dontcha know. If you can't or don't or won't share the Cheney/Taliban true-truth, you are not only stupid and unrealistic, you deserve to be punished. This confection of philosophy is wrapped up in patriotic bows and relies on creating a climate of fear among the populace. And it is in this arena that Cheney, if not the Taliban, is winning. People are willing to be afraid and blame someone else for their fears and torture them out of existence.

Cheney and the Taliban are winning. America loves a winner.

PS. One small example of the inexorable march towards a mediocre lifestyle may be seen in the unwillingness of movie theaters to show Sony's send-up of a plot to assassinate North Korean President Kim Jong- Un. Hackers broke into Sony's computer info and threatened to wreak havoc on the company if the movie were shown. Imagination is not appreciated by dictatorships like North Korea's, from which other countries (U.S., eg?) can learn ever so much..
Posted by genkaku at 6:08 AM