if a prodigy shocks, is she a prodigy 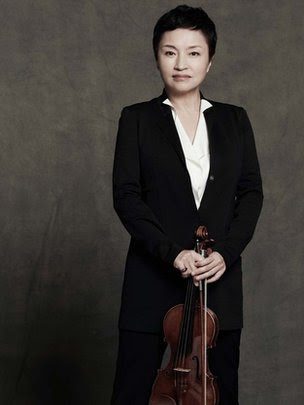 Renowned violinist Kyung-Wha Chung has shocked audiences at the Royal Festival Hall by publicly berating the parents of a coughing child. Coughing is a particular problem for classical performers in the winter months.
An academic paper released in 2013 even suggested that people appear to cough more in concerts than in they do in normal life.
The South Korean prodigy had been absent from the stage for 12 years, partly due to a finger injury.
But the 66-year-old took offence at a child coughing during her performance of Mozart's Sonata In G.
"Maybe bring her back when she's older," she scolded the parents from the stage.
Anna Picard, music critic for The Times, said the atmosphere in the hall had already been tense, such was the anticipation surrounding the violinist's comeback.
"With one shrivelling put-down, a tetchy atmosphere turned toxic," she wrote in her review.


The prodigy flops -- there, I've said it. The toiling, the straining, the virtuosity, the perfection. The sissies lack daring as they assess the scene. The maestro has not found the lush loving grasses that offer more than a perfected cutting -- the land of faith and love.

A child coughs. Bringing expertise to bear is off my charts. Does the maestro hear a rude interruption or a bit of music that fits in every human way.

Humanity. Music. What could possibly interrupt or incur an uppity riposte?

No one interrupts what cannot be interrupted and the maestro knows this at a bone-deep level.

I'm not sure why this gets under my skin. Perhaps it is that in the land of soft grasses and faith and love, the maestro is no longer "perfect."